Fujitsu Limited and Fujitsu Laboratories Ltd. today announced the development of the world's first optical transceiver technology capable of operating across a temperature range of -40°C (-40°F ) to 85°C (185°F). These devices, which can also receive burst signals widely with varying optical power, are designed for application in Gigabit Passive Optical Networking (GPON) systems that are being deployed primarily in North America to enable high speed broadband access. 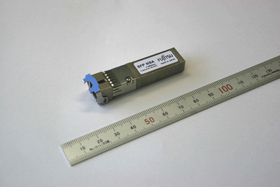 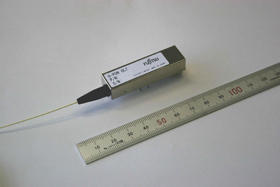 Fujitsu plans to begin sales of two optical transceiver products for Optical Line Terminal (OLT) systems based on this new technology in SFP(1) and SFF(2) formats at the end of April 2007. These products will ensure system margins that tolerate wide variations in the received optical power, resulting in dramatic improvements in optical transmission performance and enabling GPON equipment to be much more compact. These features, in turn, enable much greater flexibility in network deployments.

With ever-increasing demand for broadband access bandwidth on both backbone networks and residential networks, there is a strong need for optical transceivers that can support highly-reliable, high-capacity networks capable of delivering a wide range of applications.

Fiber-optic lines are being deployed in residential networks to support subscribers’ increasing bandwidth requirements. These lines initially supported transmission speeds of 150 Mbps, but currently offer gigabit-level speeds. In North America, the ITU-T(3) GPON standard is viewed as a likely candidate for its affinity to existing SONET networks, with demand expected to rise considerably. In a GPON network, the central office equipment is connected to subscriber premises via a star coupler, receiving subscriber signals with time-division multiplexing. Because distances to subscriber premises will vary, the central office equipment must be able to receive burst signals that vary in the received optical powers by a factor of up to 100 times.

Furthermore, since the central office equipment may be located outdoors, it must be able to operate over a wide temperature range, and a single unit should be able to accommodate multiple optical transceivers, meaning that the transceivers themselves should be compact.

The new Fujitsu transceivers meet these challenges thanks to the following technological achievements.

Fujitsu aims to increase its share of the North American optical transceiver market for optical subscriber line systems with the introduction of these products.

1. ITU-T standard optical transceivers These transceivers fully comply with ITU-T G.984.2 Class B+, the standard for GPON, with support for separate upstream and downstream signal frequencies.

3. Ability to withstand a broad range of temperatures for outdoor installations High-efficiency heat-dissipation construction and control circuitry for stable operation over a wide temperature range mean these transceivers can operate reliably at temperatures from -40°C (-40°F ) to 85°C (185°F), which make them well-suited for installation in demanding outdoor environments.

4. Plug-and-pull compatible for ease of maintenance and expansion Fujitsu's proprietary compact device technologies and high-density mounting technologies result in a product roughly 20% smaller than existing optical transceivers in the SFP format. These devices will make it easier to maintain or expand networks without disrupting existing services.

Fujitsu is a leading provider of customer-focused IT and communications solutions for the global marketplace. Pace-setting device technologies, highly reliable computing and communications products, and a worldwide corps of systems and services experts uniquely position Fujitsu to deliver comprehensive solutions that open up infinite possibilities for its customers' success. Headquartered in Tokyo, Fujitsu Limited (TSE:6702) reported consolidated revenues of about 4.8 trillion yen (US$40.6 billion) for the fiscal year ended March 31, 2006.
For more information, please see: www.fujitsu.com

All product or company names referenced herein are trademarks or registered trademarks of their respective owners. Information provided in this press release is accurate at time of publication and is subject to change without advance notice.