Fujitsu Limited today announced the development of the world's first 2.5" hard disk drive that offers storage capacity of 300 gigabytes (GB) with a Serial ATA(1) interface. The new hard disk drive "MHX2300BT" will be available in late February 2007. Featuring the highest storage capacity in the 2.5" class, it will be available on a global basis for use primarily in multifunctional mobile PCs and digital TVs. 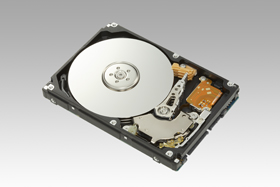 Fujitsu began selling hard disk drives with perpendicular magnetic recording in October of this year. It has been an industrial leader in introducing high-capacity 2.5" hard disk drives, launching products with 160 GB in September 2005 and 200 GB in May 2006 that garnered high praise from many customers.

The new hard disk drives are the RoHS compliant(2) and have read/write power consumption requirements of just 1.6 W, among the lowest in the world, making them environmentally-friendly products. They are also exceptionally quiet, emitting just 2.1 bels(3) of noise at idle.

Fujitsu is a leading provider of customer-focused IT and communications solutions for the global marketplace. Pace-setting device technologies, highly reliable computing and communications products, and a worldwide corps of systems and services experts uniquely position Fujitsu to deliver comprehensive solutions that open up infinite possibilities for its customers' success. Headquartered in Tokyo, Fujitsu Limited (TSE:6702) reported consolidated revenues of about 4.8 trillion yen (US$40.6 billion) for the fiscal year ended March 31, 2006.
For more information, please see: www.fujitsu.com

All product or company names referenced herein are trademarks or registered trademarks of their respective owners. Information provided in this press release is accurate at time of publication and is subject to change without advance notice.