With a transmission capacity of 1.28 Terabits(2), this optical submarine cable network extending from Singapore to France will provide a catalyst to the development of IT industries in the neighboring countries and amply accommodate the rapidly growing demand for Internet and broadband services.

An inauguration ceremony marking the launch of telecommunications services using the optical submarine cable is being held today in Dubai, UAE, attended by the representatives from 16 international telecommunications carriers(3) and other participants.

Under the SEA-ME-WE 4 contract, Fujitsu was responsible for constructing approximately 8,000 kilometers of the optical submarine cable network from Singapore to Mumbai, India (Segment 1), and supplying the entire system for this segment. Fujitsu also supplied submarine repeaters for the entire Mediterranean Sea segment (Segment 4).

Fujitsu has a solid track record in optical submarine telecommunications projects, including large-scale, transoceanic projects, and has always completed these projects on schedule. To date the company has executed projects involving nearly 90,000 kilometers of optical submarine cable, equivalent to over twice the earth's circumference. The company has also installed submarine repeaters at ocean depths of 8,000 meters without experiencing one instance of equipment failure to date. Reliability has been the hallmark of Fujitsu's network infrastructure contributions in this era of high-capacity optical transmission systems.

An earthquake off the coast of Sumatra and the devastating tsunami that followed occurred in December 2004, just prior to the scheduled start of the cable laying operation in the Bay of Bengal. Fujitsu immediately resurveyed the condition of the seabed along the route and confirmed the integrity of the route, enabling the completion of the cable system without significant delay. 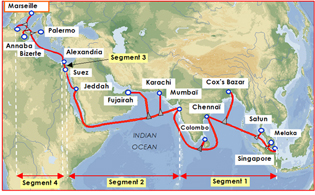 Fujitsu is a leading provider of customer-focused IT and communications solutions for the global marketplace. Pace-setting device technologies, highly reliable computing and communications products, and a worldwide corps of systems and services experts uniquely position Fujitsu to deliver comprehensive solutions that open up infinite possibilities for its customers' success. Headquartered in Tokyo, Fujitsu Limited (TSE: 6702) reported consolidated revenues of 4.7 trillion yen (US$44.5 billion) for the fiscal year ended March 31, 2005. For more information, please see www.fujitsu.com

All product names or company names mentioned herein may be trademarks or registered trademarks of their respective owners.