Fujitsu's new technology will play an important role in reducing power consumption of transmission amplifiers used in next- and future-generation mobile phone base station systems.

Details of this technology will be presented at the IEEE International Electron Devices Meeting (IEDM) to be held in Washington, D.C. from December 5.

As transmission speeds are becoming faster for wireless communications, the power consumption of mobile phone base stations will increase. In order to realize base stations with lower power consumption, GaN HEMT amplifiers are currently being developed. Next- and future-generation networks will have greater output levels, necessitating much higher power efficiency to dramatically reduce the increased power consumption. However, applying existing GaN HEMT technology to reduce power consumption had proven problematic due to the fact that gate leakage current increases as power efficiency rises, creating problems in terms of reliability and amplification characteristics.

To improve the gate leakage current, there is a method which employs the insertion of an insulation layer directly below the gate. However, this results in the formation of a very large area in which electron movement is impaired, known as the "interface trap(4)" region, resulting from the surface contact between the insulation layer and semiconductor. This in turn impaired the amplification of the electrical signal applied at the gate electrode and degraded the transistor's output characteristics. As a result, no output beyond 100W could be obtained thus far. This is attributable to the fact that the semiconductor surface in contact with the insulation layer used a layer of aluminum gallium nitride (AlGaN), which contains aluminum. Aluminum oxidizes easily, which leads to degradation of performance.

Fujitsu succeeded in overcoming the technological obstacles by modifying the surface structure of GaN HEMT. This transistor (patent pending) consists of insulated film of silicon nitride deposited on the outermost layer of a GaN HEMT crystal, that has a thin film of n-type doped GaN. By using a GaN layer for the semiconductor surface, instead of an AlGaN layer, which was conventionally used with insulated gate transistors, Fujitsu succeeded in preventing oxidation of the aluminum surface.

Fujitsu succeeded in reducing gate leakage current to 0.1 microampere or less, which is less than one-one millionth that of conventional technologies that do not use insulated gates.

Performance was also improved, with maximum output of 110 W achieved. This is the world's first insulated gate HEMT capable of producing output of over 100W, attributable to the reduction of the interface trap region. In conjunction with the distortion-compensation circuits(5) that are essential for base station amplifiers, Fujitsu was able to verify that is was possible to lower the value of output power leakage into adjacent channels to practical levels(6). This is the world's first insulated gate HEMT for which distortion characteristics have been proven.

Because this insulated gate technology can operate across the band of maximum efficiency, by combining this new technology with the development of next-generation distortion circuits for high-efficiency ranges, it paves the way for significant power savings for transmission amplifiers.

Fujitsu intends to adapt this technology to its production process and develop GaN-HEMT devices for use in next- and future-generation base station systems. 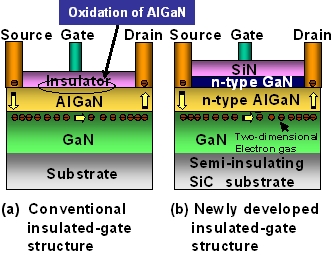 Figure 1: Schematic cross-sectional view of insulated-gate GaN-HEMTs. (a) Conventional and (b) Newly-developed strutures. 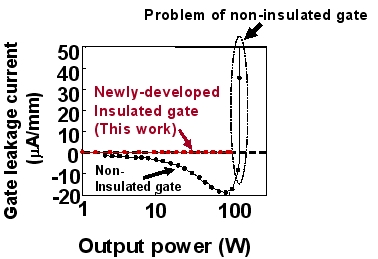 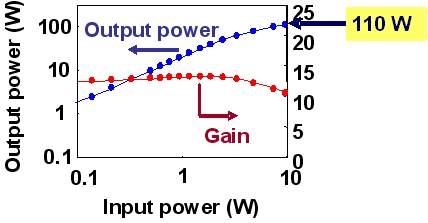 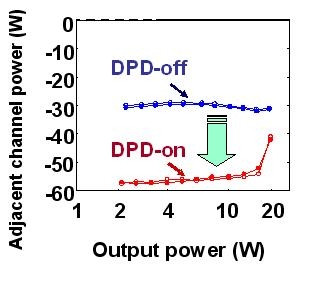 All proper names mentioned herein may be trademarks or registered trademarks of their respective owners.