Fujitsu Frontech Limited and Fujitsu Laboratories Ltd. today announced that Fujitsu Frontech will begin limited sales of their new service robot, enon(TM), on a limited basis in Japan from September 13, 2005. Jointly developed by the two companies, enon is an advanced practical-use service robot that can assist in such tasks as providing guidance, escorting guests, transporting objects, and security patrolling.

enon will be presented at the 23rd Annual Conference of the Robotics Society of Japan 2005, scheduled to be held at Keio University in Tokyo from September 15. enon will also be exhibited at the 2005 International Robot Exhibition to be held at Tokyo Big Sight from November 30. 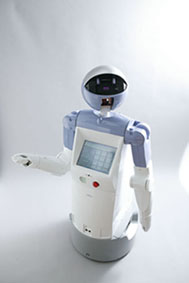 enon is an acronym of the phrase "exciting nova on network." The phrase conveys the robot's ability to autonomously support customers' tasks while being linked to a network.

There is much anticipation for the practical use of service robots in a wide range of applications, to enable a more enriched society and in view of declining birthrates and aging populations in many countries. Fujitsu's new service robot is a culmination of the collaboration of Fujitsu Laboratories and Fujitsu Frontech to develop a robot with practical applications useful to people in their daily lives. In September 2004 the two companies succeeded in developing a prototype service robot designed to support individuals in offices or commercial establishments, by assisting with duties such as providing guidance, transporting objects, and security patrolling.

Fujitsu Frontech is scheduled to begin initial sales of enon on a limited basis in Japan, with delivery scheduled from November of this year. After observing operational performance of enon in various real-use situations through these initial sales, Fujitsu Frontech will consider expanding marketing of enon. 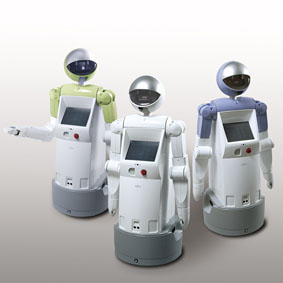 As a fully developed practical-use service robot, enon features enhancements such as lighter weight, smaller size, and more safety features than the prototype that Fujitsu developed last year. enon is an advanced service robot capable of accomplishing multiple tasks such as providing guidance, escorting people, transporting objects, and security patrolling, thereby differentiating enon from other service robots on the market that are designed specifically for only a single task such as transporting, cleaning, or surveillance.

Fujitsu Frontech is scheduled to begin initial sales of enon on a limited basis in Japan, with delivery scheduled from November of this year. After observing operational performance of enon in various real-use situations through these initial sales, Fujitsu Frontech will consider expanding marketing of enon.

Fujitsu anticipates that enon will be useful in applications such as the following:

enon is suited for reception duties or explaining of exhibits, as it can detect when people stand in front of it and can provide a variety resourceful information such as product details, in addition to escorting guests to designations. Aside from its voice function, through its touch panel LCD monitor enon can also offer a multitude of user-friendly information through visual images. This monitor can also be utilized to administer questionnaires and through interconnection to a server can be used to accumulate guest information.

enon can carry parcels an internal storage compartment in its torso and deliver them to a designated location. Through network interconnection, users can call for enon to come from a remote location and have goods delivered to a specified designation.

enon is capable of regularly patrolling facilities following a pre-set route, and by using a network has the ability to transmit images of stipulated locations to a remote surveillance station. enon can also respond flexibly or to users' spontaneous requests through a network, such as directing enon to view specific sites.

By referring to a pre-programmed map, using its wide-angle cameras on its head to perceive the presence of people or objects surrounding itself while simultaneously determining their location, enon can autonomously move to a designated location while avoiding obstacles. This makes enon extremely user-friendly in that there is no need for special markings to be placed on floors or walls of the robot’s route as guides.

enon can carry a maximum load of 10 kilograms(1) in the internal storage compartment of its torso and safely deliver to a designated location. By using its specially designed carriage, enon can unload objects as well.

With a single arm, enon is capable of grasping and passing objects that are up to 0.5 kilograms. Compared to the four degrees of freedom which the arms of its prototype featured, enon's arm features have been enhanced to enable five degrees of freedom.

Speech recognition and speech synthesis in Japanese are included as standard features. enon's touch panel LCD monitor on its chest enables the robot to communicate in a diverse range of situations.

By linking enon to a network through a wireless LAN(2), it can offer a variety of functions such as retrieving necessary information from a server and providing the information either by voice or image, or transmitting images self-accumulated by the robot to the server. Fujitsu plans to provide external control and remote control functions as options.

When providing information to users, enon operates with its head and arms facing the same side as its touch panel LCD monitor, so that enron faces its users. When relocating itself from one location to another or when carrying objects that are stored in the carriage of its torso, enon's head and arms swivel to face the same direction it is moving toward, which is reverse the side featuring its LCD monitor. This enables enron to continue to communicate through its LCD monitor with users located behind itself, even while it is relocating. enron can also autonomously maintain a natural posture, by keeping the same range of arm motion when providing information and while relocating.

Light emitting diodes (LEDs) on the eye and mouth area of its face enable enon to have a wide range of facial expressions. Enon also has LEDs on the back of its head, making it possible for the robot to display its operational state to the rear as well.

Fujitsu has placed utmost priority on making enon safe, incorporating a variety of safety features including significantly reducing the weight and width of the robot compared to its prototype, and enhancing arm functions. enon is currently undergoing safety appraisal (appraisal in process) by an external third party, the NPO Safety Engineering Laboratory. Fujitsu will continue to place utmost importance on safety of its products.

Shipping to select customers will start from November 2005.

Pricing quotes will vary by requested specifications per individual robot.

Founded in 1968 as a wholly owned subsidiary of Fujitsu Limited, Fujitsu Laboratories Limited is one of the premier research centers in the world. With a global network of laboratories in Japan, China, the United States and Europe, the organization conducts a wide range of basic and applied research in the areas of Multimedia, Personal Systems, Networks, Peripherals, Advanced Materials and Electronic Devices. For more information, please see: http://www.labs.fujitsu.com/en/

All product names or company names mentioned herein may be trademarks or registered trademarks of their respective owners.

All reproductions of photographs shown with this press release must include the following photo credit: Courtesy of Fujitsu.