Co-develops with DoCoMo a prototype recharger for FOMA handsets

The jointly developed fuel cell prototype will be exhibited at the DoCoMo booth at Wireless Japan 2005 to be held from July 13 to 15, and at the Environment corner at Fujitsu Forum 2005 from July 14 to 15, both in Tokyo.

The R&D of micro fuel cells with replaceable fuel cartridges is being conducted, with the purpose of extending the operation time of mobile devices such as mobile phones.

In addition, since micro fuel cells can use methanol derived from biomass resources, there is anticipation that they will help reduce burden on the environment.

The performance of micro fuel cells depends on how compact they can be made and how much energy can be created from a given volume of fuel. Higher-capacity micro fuel cells will significantly improve user convenience, such as by increasing the number of times recharging is possible with a single cartridge.

Since micro fuel cells that employ methanol produce energy through the reaction between methanol and oxygen present in the air, power capacity can be increased by raising the concentration of the methanol solution. However, for passive type fuel cells(2) that are suited for miniaturization and lighter weight, a phenomenon known as "methanol crossover" occurrs, which is a fuel permeation that occurs between battery electrodes when high-concentration fuel is used directly with passive fuel cells, thereby resulting in lower generation efficiency.

Fujitsu developed new technology that makes it possible to use high-concentration methanol with concentration of over 99% for a passive micro fuel cell. By developing and employing a new material that reduces the methanol crossover effect by half compared to Fujitsu previous materials and to one-twentieth that of other commercially available materials, and by using the water by-product which appears during power generation to dilute the fuel, Fujitsu succeeded in effectively limiting the decline of power generation efficiency when using high-concentration fuel. Fujitsu and DoCoMo employed the new technology to co-develop an operable FOMA handset charger prototype.

Fujitsu also verified that the prototype FOMA handset recharger using the micro fuel cell can charge up to three lithium ion power batteries embedded in a FOMA handset, with a single cartridge with 18 cc of methanol fuel.

In comparison to previous fuel cells from Fujitsu and DoCoMo which use methanol at 30% concentration, the prototype recharger using the new micro fuel cell enables up to three times the power output time with a single 18 cc methanol fuel cartridge.

Through the development of high-performance materials, Fujitsu will continue to develop micro fuel cells that are more compact and operable over longer periods of time. 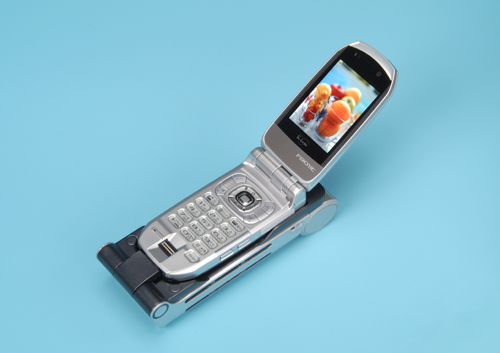 All product names mentioned herein are trademarks or registered trademarks of their respective companies.