Fujitsu Limited, a leader in mission critical computing, today announced the availability of five new PRIMEPOWER™ server models based on SPARC64™ V RISC processors that exceed 2GHz clock speeds. These UNIX® servers, designed for mission-critical computing, enable Fujitsu to offer its enterprise customers a broad choice of IT systems, services, and solutions running on the Solaris™ Operating System. Simultaneously, Fujitsu announced that a PRIMEPOWER 2500 configured with 128 2.08GHz SPARC64 V CPUs, has set a world record for the SAP® SD two-tier Standard Application Benchmark with 1.6 times the performance of its predecessor with 1.30GHz processors (for details see: www.sap.com/benchmark). 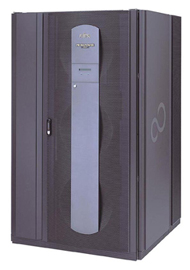 The new servers are being released globally today through Fujitsu Limited in the Asia/Pacific region as well as Fujitsu Computer Systems in North America and Fujitsu Siemens Computers in Europe, the Middle East and Africa.

In today's turbulent business environment, information systems need the performance to stand up to load concentrations and the flexibility to accommodate changes and expansions. In response to these requirements, Fujitsu has designed the new PRIMEPOWER server models to yield superior performance in a wide range of applications, and with the flexibility to meet a wide range of customer needs. The new models are designed with reliability features tailored to mission-critical applications such as large databases and online transactions. With support for both hardware partitioning and the virtualization technology in the Solaris™ 10 Operating System, it gives customers greater flexibility in administering their systems. Delivering superior system stability, PRIMEPOWER servers help improve operational efficiency and continuity, drive down TCO and help business grow.

About the New Models

Reliability optimized for use in mission-critical applications

With 90-nm process technology and copper interconnects, the SPARC64 V is a showcase for Fujitsu's cutting-edge technology and is equipped with error-handling features including high precision error detection and ECC, error correction through instruction retry, and other advanced RAS functions. All major components, including the power supply and system boards, are redundant, and with support for hot-swapping, the system offers reliability and availability needed for continuous operation.

Using a hardware partitioning function, PRIMEPOWER servers can be configured as up to 15 independent units, each running its own operating system environment. In the unlikely event of a system error on one, none of the other units will be affected. These servers also implement the new Solaris Container virtualization scheme that is part of Solaris 10. With this, each partition can be virtually split into as many as 8,191 units, offering customized allocation of OS based on customer operation requirement. Adding and removing virtual partitions require only a simple, quick setting change, and does not require a re-installation of the OS.

All SAP benchmarks stated in this document comply with the rules of the SAP Standard Application Benchmark Council and have been audited and certified by SAP. More information: http://www.sap.com/benchmark

PRIMEPOWER servers are respected for their performance and reliability by customers around the globe, and have enjoyed strong sales in Europe and the U.S. in recent years, with sales outside Japan in FY2004 (Apr. 2003 - Mar. 2004) making up 60% of the total. Fujitsu is working with Sun Microsystems, Inc. on the next generation of Solaris and SPARC®-based servers (codenamed APL: Advanced Product Line), which will debut in mid-2006 and offer even higher performance solutions to Solaris and SPARC customers. PRIMEPOWER is one of the core products in the Fujitsu TRIOLE strategy for optimizing customers' IT infrastructures. Together with the GS21 Global Server, PRIMERGY IA server, and PRIMEQUEST mission critical IA server, it is part of Fujitsu's complete range of server products for customer's various requirements.

About the TRIOLE Strategy

About the TRIOLE Strategy Fujitsu is committed to providing its customers with products, solutions and services that will further optimise their IT infrastructure and improve their business agility. Its TRIOLE strategy is the aggregate of three core principles: virtualisation, automation and integration. Fujitsu has applied these principles to design and deliver highly dynamic IT solutions with the highest levels of compatibility and consistency. The result enables customers to increase efficiency, enhance agility and improve continuity now and into the future. For more information on the TRIOLE strategy, please visit: http://www.fujitsu.com/triole

Fujitsu is a leading provider of customer-focused IT and communications solutions for the global marketplace. Pace-setting device technologies, highly reliable computing and communications platforms, and a worldwide corps of systems and services experts uniquely position Fujitsu to deliver comprehensive solutions that open up infinite possibilities for its customers' success. Headquartered in Tokyo, Fujitsu Limited (TSE:6702) reported consolidated revenues of 4.7 trillion yen (US$44.5 billion) for the fiscal year ended March 31, 2005. For more information, please see: www.fujitsu.com