Fujitsu Laboratories, Ltd. today announced the development of a single-chip multi-core processor designed for image processing use in high-performance digital consumer products, that is equipped with four FR-V processor cores (FR550)(1) with operation frequencies of 533 megahertz (MHz). Using software only, the new multi-core processor features image processing functionality at speeds of 51.2 GOPS (giga operations per second) and data transfer performance at speeds of 1 gigabyte per second (GB/s), both which are four or more times greater than that of the conventional FR-V processor. This new multi-core processor is suited for wide application, in that by utilizing only software it enables image processing that in the past required customized large-scale integrated circuit chips (LSIs), and offers high performance and flexibility to adapt easily to specification modifications, version upgrades, and added features.

Fujitsu will be presenting details of its new multi-core processor and related technology at the 2005 IEEE International Solid-State Circuits Conference, which started from February 6 in San Francisco.

With the widespread popularity of HDTV broadcasting and high-resolution digital cameras that are capable of capturing more than of 16 megapixels, image processing and data transfer of large data sizes at high speeds are essential. Up until now, customized LSIs had been used to handle the challenges of these processing needs. However, due to the fact that functions of customized LSIs for this purpose need to be set, it is very difficult to adapt quickly and with flexibility within a short time frame to product changes such as specification modifications, version upgrades and added features. As such, there has been a pressing need for a high-performance embedded processor that can implement such product changes through software only.

In contrast to high power-consuming processors for PCs and workstations, embedded processors must operate on low power. However, conventional embedded processors without efficient parallel processing could not execute massive image processing and high speed data transfer with low power consumption. Another drawback was that in order to achieve high processor performance with low power consumption, LSIs in general become more susceptible to electrical noise, thereby making them prone to malfunction when they are mounted on printed circuit boards.

Features of Fujitsu's new technology are as follows:

3. High-precision power source noise analysis simulation environment Fujitsu developed an environment capable of accurate simulations of power source noise, which occurs when LSIs are operated on printed circuit boards. This enables early verification of the effect from noise from the power supply on LSIs when they are operated on printed circuit boards, thereby enabling this verification during the pre-fabrication design stage.

Fujitsu has developed a high-performance single-chip multi-core processor for embedded applications that offers both image processing and data transfer that are four or more times greater than the performance of Fujitsu's conventional FR-V processor. Fujitsu has succeeded in realizing media processing at 51.2 GOPS and data transfer at 1GB/s independently. These features make it the world's first processor for embedded applications that is capable of handling entirely through software, highly demanding tasks such as playback of high-definition digital broadcasts with 1920x1080 color video encoded with MPEG2 MP@HL(3).

Power consumption of Fujitsu's new processor is a mere 3 watts (3W), significantly lower than that of other CPUs such as for PCs, which have about 50W power consumption. This enables the new processor to achieve high performance while meeting specification requirements for digital consumer products.

Moreover, while achieving both higher performance and lower power consumption, the processor also features a newly-developed power supply noise analysis simulator, enabling the processor's stable operation from the first test at the time it is mounted on the circuit board. As the processor incorporates printed circuit board co-simulation results during the design stage, the need for re-design is eliminated, thereby shortening the processor development period by approximately two months in comparison to if re-design were necessary.

Fujitsu plans to apply its new multi-core processor technology to its FR-V product family, and plans to commercialize it within fiscal 2005 for use with products that require sophisticated image processing performance, such as multi-functional printers or digital entertainment products. In addition, hereafter Fujitsu plans to equip its massively parallel simulation server for genomic-based drug discovery research known as BioServer(4), with FR-V products incorporating the new technology. 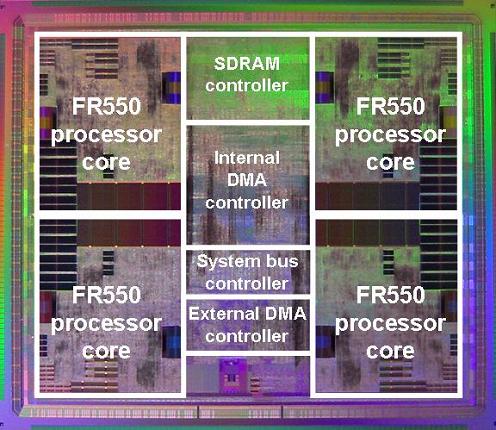 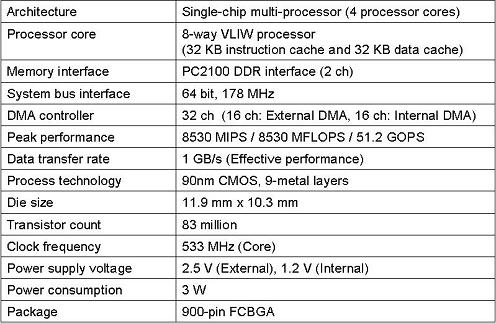 Founded in 1968 as a wholly owned subsidiary of Fujitsu Limited, Fujitsu Laboratories Limited is one of the premier research centers in the world. With a global network of laboratories in Japan, China, the United States and Europe, the organization conducts a wide range of basic and applied research in the areas of Multimedia, Personal Systems, Networks, Peripherals, Advanced Materials and Electronic Devices. For more information, please see: http://jp.fujitsu.com/group/labs/en/.