In the past, optical amplifiers (erbium-doped fiber amplifiers: EDFAs) had a significant impact on optical communications. Today, over 15 years since the development of EDFAs, there is much anticipation for the realization of optical signal processing with not only optical amplification capabilities but additional features as well.

An optical switch is one of several essential elements of fundamental technology required for optical signal processing in photonic networks of the future. Although conventional optical switches operated at high-speed, they had big power losses. Therefore, signal quality degradation was a serious problem even after the compensation of losses.

Fujitsu Laboratories and Heinrich-Hertz-Institut confirmed, that the optical switch output was amplified to roughly six times (7.6 decibels) the power of the initial input signal in the entire 1530-nanometer to 1565-nanometer wave bandwidth (C Band), which is the most commonly used in backbone optical communications. With the optimization of the nonlinear fiber, the amplification rate for the optical switch can be expanded to 100 times (20 decibels) or more than the initial signal, thereby enabling design of devices to cover wider bandwidths.

The optical switch does not rely on data modulation formats, which was confirmed by switching phase-modulated signals.

Fujitsu Laboratories and Heinrich-Hertz-Institut anticipate that this new optical switch will enable use in applications such as the following, as an integral part of next generation ultra high speed photonic networks:

Fujitsu Laboratories and Heinrich-Hertz-Institut will continue to enhance higher functionality and packaging technologies for this switch, and conduct further research to realize its practical application. 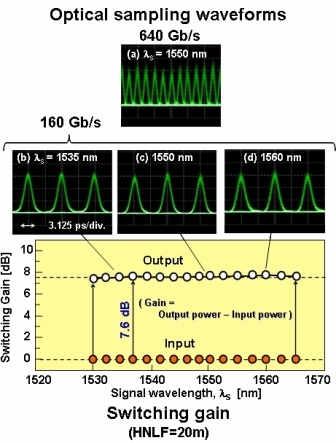 Founded in 1968 as a wholly owned subsidiary of Fujitsu Limited, Fujitsu Laboratories Limited is one of the premier research centers in the world. With a global network of laboratories in Japan, China, the United States and Europe, the organization conducts a wide range of basic and applied research in the areas of Multimedia, Personal Systems, Networks, Peripherals, Advanced Materials and Electronic Devices.
For more information, please see: http://www.labs.fujitsu.com/en/

Research and development activities at the Heinrich-Hertz-Institut (HHI) are concentrated to expand the principles of information technology and to demonstrate new applications for new products in partnership with the industry.

The core competencies of HHI are in the areas of Photonic Networks, Mobile Broadband Systems and Electronic Imaging Technology for Multimedia. In its three main working areas the HHI is a valued partner in national and international cooperative research and development projects.

Nearly half of the HHI staff is working in the Photonics area. The objective of research is to make substantial contributions to the development of photonic networks and advanced photonic components. HHI has been involved in optical transmission research from the very beginning. Along with this expertise a full range of design, measurement and experimental capabilities exists for photonic networks, as well as for InP based photonic components and photonic integrated circuits, complemented by silica on silicon and polymer devices. We put science into action! For more information, please see: http://www.hhi.fraunhofer.de/english