Fujitsu Laboratories Ltd. and Fujitsu Frontech Limited today announced their joint development of a service robot that can provide support for various services in offices, commercial facilities, and other public areas in which people work or spend leisure time. The newly developed robot features functions that enable it to provide such services as greeting and escorting guests onto elevators, operating the elevators, moving parcels using a cart, and security patrolling of buildings at night. 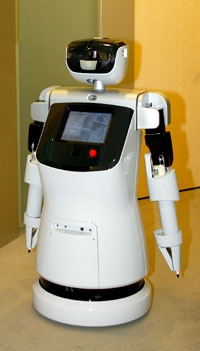 Fujitsu Frontech Limited will commercialize the robot, with sales scheduled to begin in June 2005.

Details of the robot are to be presented at the 22nd Annual Conference of the Robotics Society of Japan scheduled to be held from September 15 at Gifu University in Japan. There will also be a demonstration of the robot at the Combined Exhibition of Advanced Technologies Providing Image, Information and Communications (CEATEC) Japan 2004, opening on October 5 at Makuhari Messe in Japan.

There is great anticipation for the application of robots for a wide range of fields such as in medical services, social services, housework, and so on. According to Japan's Ministry of Economy, Trade and Industry (METI), societal expectations are high for robots to contribute to the realization of an enriched society. Fujitsu Laboratories has been conducting ongoing R&D on robots for practical use, in the quest for robots to support people in their daily lives and make their lives more convenient.

Fujitsu's past robot offerings include the bipedal robots HOAP-1, that was developed in September 2001, and HOAP-2 developed in March 2003, both of which were designed for a broad range of applications for R&D of robot technologies and which are commercially available from Fujitsu Automation Limited. Fujitsu also developed MARON-1 in October 2002, a home robot that can be controlled from a mobile phone and which is being sold by PFU Limited on a limited basis. Building on its past expertise in developing robots for R&D and home-use applications, Fujitsu went further to the next level by developing a robot that can co-exist with people and provide services in a variety of places such as offices and public facilities.

The new service robot is comprised of a head capable of moving up, down, left, and right, arms with four degrees of freedom(1), left and right motor-driven wheels that can rotate independently, a CPU that controls the entire robot, and a 3D visual processing system comprised of a digital signal processor (DSP)(2) and custom hardware.

Key features of the robot are as follows:

1. Ability to autonomously move to a designated location according to a pre-programmed map while carefully avoiding obstacles

The robot is capable of quickly perceiving people or things in its surrounding areas while simultaneously measuring their location, through the use of two cameras which can be quickly self-selected from its eight available cameras as necessary, using the newly developed 3-D visual processing system. Visual processing enables the robot to detect and avoid obstacles so that it can move safely to a designated location, thereby making it capable of completing tasks alongside people.

2. Ability to perceive, take hold of, and hand objects to people

By utilizing visual processing the robot can hold things and press buttons, such as elevator buttons. The arms can move naturally and smoothly through the use of the central pattern generator (CPG)/ numerical perturbation (NP) method(3) developed by Fujitsu, which simulates the nervous system of vertebrates.

3. Ability to turn toward voices when called, and accomplish tasks by following voice instructions

The robot is equipped with multiple microphones that enable detection of the direction of a sound source. The robot can also visually detect people, and can understand and complete simple tasks that are instructed verbally.

4. Functions to search for information according to users' needs and present the information using the most appropriate method

The robot can connect to the Internet, search for information according to user request, and present the information in the method that best fits the situation, such as by announcing the information, displaying the information on its own display, pointing to information on a separate source, and so on. Various kinds of Internet services can be provided through the robot by using its network-related functions. Self-equipped with a web server, the robot can be instructed, programmed and remote-controlled from an external devices such as computers, that do not feature specific applications for the robot.

When low on power, the robot autonomously moves to a charger to self-charge by using high-density non-contact charging based on an induction charging method to enable safe charging.

6. Ability to flexibly maneuver itself within compact spaces, on slopes, over minor surface gradations, and complete tasks

The robot can pivot on the spot by using two driving wheels that move independently. It also can move flexibly and smoothly over slopes and uneven surfaces, by utilizing a hing that connects its front and back driving wheels.

Fujitsu plans to develop applications for which this new robot can be used, with Fujitsu Frontech Limited scheduled to commercialize and begin selling the robot in June 2005.

Founded in 1968 as a wholly owned subsidiary of Fujitsu Limited, Fujitsu Laboratories Limited is one of the premier research centers in the world. With a global network of laboratories in Japan, China, the United States and Europe, the organization conducts a wide range of basic and applied research in the areas of Multimedia, Personal Systems, Networks, Peripherals, Advanced Materials and Electronic Devices.
For more information, please see: http://www.labs.fujitsu.com/en/

All products and company names mentioned herein are the trademarks or registered trademarks of their respective firms.