Fujitsu Limited and a research group at the University of Tokyo led by Professor Yasuhiko Arakawa, today announced the joint development of a quantum dot(1) laser that succeeds in minimizing temperature-sensitive output fluctuations, which was not possible with semiconductor lasers in the past. The newly developed quantum dot laser achieves high-speed operation of 10 gigabits per second (Gbps) across a temperature range of 20°C to 70°C without electrical current adjustments, and has minimal output fluctuations caused by changes in temperature. This breakthrough technology will pave the way for compact, low-cost, and low power-consumption optical transmitters targeting optical metro-access systems(2) and high-speed optical LAN(3) for which further development continues.

Details of the new technology were presented as a post-deadline paper at the European Conference and Exhibition on Optical Communication 2004 (ECOC 2004) that was held in Stockholm from September 5 to September 9.

In order to achieve smaller size, lower power consumption, and lower cost, semiconductor lasers used as optical transmitters in metro access optical networks and high-speed optical LANs, there is a need for the lasers to operate at high speeds even at high temperatures without a cooler. Currently, by using strained quantum-wells in the light-emitting area of lasers, semiconductor lasers known as strained quantum-well lasers, which operate at high-speeds of 10Gbps and temperatures up to 85°C, are being commercialized for optical networks.

Due to the fact that the optical output of strained quantum-well lasers is sensitive to changes in ambient temperature, it is necessary for driving current to be adjusted accordingly to ambient temperatures. As such, peripheral circuits are required, thereby hampering reductions of size, cost, and power consumption that are needed for optical metro-access systems and high-speed optical LANs.

The new semiconductor laser features extremely minimal characteristic changes that are due to temperature fluctuations, and uses 3-dimensional nano-structured quantum dots in the light-emitting area (Figure 1). Professor Yasuhiko Arakawa of the University of Tokyo theorized in 1982 that the operation of quantum dot lasers does not rely on temperature, but such temperature-independent operation had only been realized at low temperatures thus far.

By increasing optical gain through multi-layering quantum dots into 10 layers, raising the density of each layer, p-doping (inserting a p-type impurity in close proximity to the quantum dots), and by using a laser structure that features low parasitic capacitance for optimized high-speed modulation, the new technology successfully achieves high-speed operation of lasers with temperature-independent output at temperatures exceeding room temperature.

The newly developed quantum dot laser realized high-speed operation of 10Gbps at wavelengths of 1.3 micrometers which are used for optical transmission systems, for a temperature range from 20°C to 70°C without drive current adjustments. The achieved 10Gpbs high-speed operation is the world's fastest for a quantum dot laser for use in optical telecommunication systems.

Optical output characteristics of the new quantum dot laser were measured and recorded in increments of 10°C. The optical output characteristics were nearly stable independent of temperature, for a 20°C to 50°C range. Even for temperatures exceeding 50°C, efficiency (slope of the characteristics curve) was constant, with minimal variances up to 70°C (Figure 2, left-side table). In comparison to the performance of conventional strained quantum-well lasers of the past, the new quantum dot laser achieves significantly higher stability of temperature (Figure 2, right-side table).

10Gbps modulation waveforms of the new quantum dot laser at 20°C and 70°C without constant drive current were verified (Figure 3, upper section). Although the current used for the laser was the same at both temperatures, a distinct light output diagram is achieved with the extinction ratio(4) of 7 decibels (7dB). Waveforms for a strained quantum-well laser under the same conditions showed output degradation and pattern disfigurement, with indistinct waveforms (Figure 3, lower section).

The results achieved with the newly developed quantum dot laser will enable major simplification of circuits to drive lasers, thereby paving the way for optical transmitters that are compact, low-cost, and low power-consuming, for future optical metro-access systems and high-speed optical LANs.

Fujitsu and the University of Tokyo will continue development to extend the temperature range for adjustment-free operation and to achieve single-mode lasing, targeting practical commercial application of this technology by 2007. 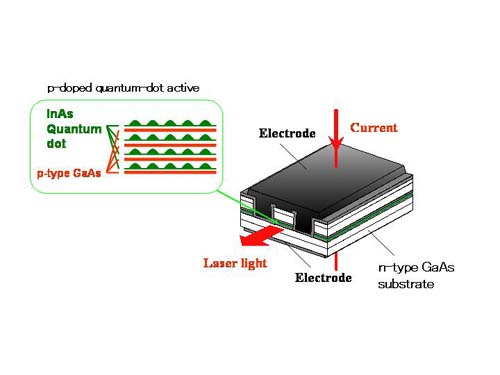 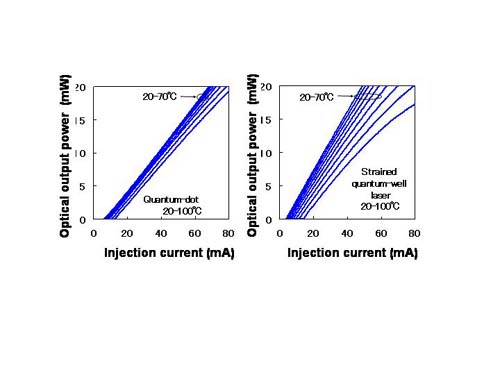 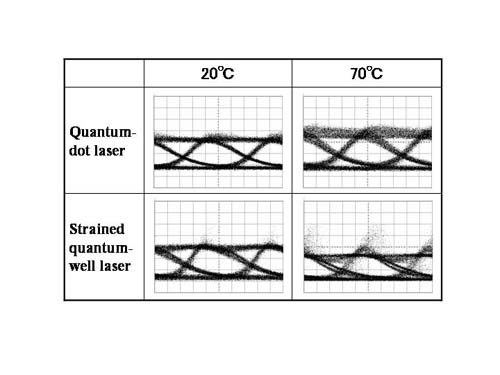 Figure 3. Modulation waveform at 10 Gbps at 20°C and 70°C with no current adjustments 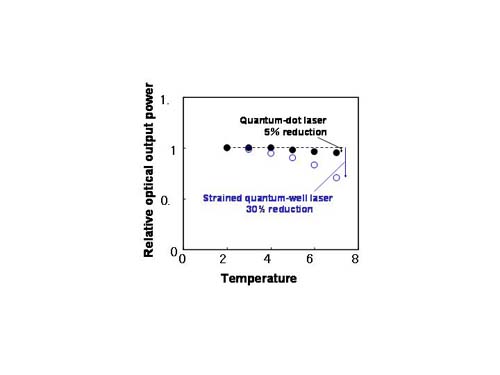 Fujitsu is a leading provider of customer-focused IT and communications solutions for the global marketplace. Pace-setting technologies, highly reliable computing and communications platforms, and a worldwide corps of systems and services experts uniquely position Fujitsu to deliver comprehensive solutions that open up infinite possibilities for its customers' success. Headquartered in Tokyo, Fujitsu Limited (TSE: 6702) reported consolidated revenues of 4.7 trillion yen (US$45 billion) for the fiscal year ended March 31, 2004.
For more information, please see: http://www.fujitsu.com/

Details are current on the day of issue of the press release and may be subject to change thereafter without prior notice.