Fujitsu Laboratories Ltd. today announced that it has developed a technology for the world's first contactless biometric authentication system that can verify a person's identity by recognizing the pattern of blood veins in the palm. 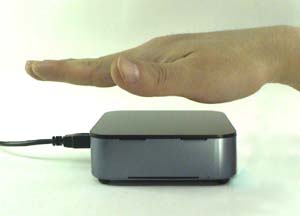 Like fingerprints, the pattern of blood veins in the palm is unique to every individual, and apart from size, this pattern will not vary over the course of a person's lifetime. The fact that this pattern lies under the skin makes it that much harder for others to read, so palm-vein pattern biometrics are an especially secure method of verification. In contrast to the contact-based biometric technology announced by Fujitsu last August, this new contactless technology alleviates concerns about hygiene associated with having many people touching the same sensor device, making it ideal for widespread use.

Details of this technology are being presented at the general meeting of the Japan Medical Association to be held at the Fukuoka International Center on April 3 - 6.

The ability to verify identity has become increasingly important in many areas of modern life, such as electronic government, medical administration systems, access control systems for secure areas, passenger ticketing, and home office and home study environments. Technologies for personal identification include code numbers, passwords, and smart cards, but these all carry the risk of loss, theft, forgery, or unauthorized use. It is expected that biometric authentication technology, which authenticates physiological data, will be deployed to supplement - or as an alternative to - these other systems.

For that reason, there is a market need for voice or facial recognition systems and other biometric authentication technology that can read physiological data without requiring physical contact with sensor equipment, and the development of such systems that are both practical and offer greater precision.

Fujitsu's new technology is a combination of a device that can read the pattern of blood vein patterns in the palm without making physical contact (see photo) and software that can authenticate an individual's identity based on these patterns. Infrared light is used to capture an image of the palm as the hand is held over the sensor device. The software then extracts the vein pattern and compares it against patterns already stored in the database.

Since the palm floats in mid-air with contactless-type systems, there are no restrictions as to height and side positioning of the palm to a reader. Fujitsu newly developed a technology that, even if a sensor device is installed in several different locations, can detect palm position and verify palm vein patterns at high speeds and reliability, as well as a technology that can optimally control the lightning and the capturing of a variety of palm positions.

Tested with the cooperation of 700 people aged 10 to 70 from different walks of life, a total of 1,400 palm profiles were collected. In terms of authentication precision, the system had a false rejection rate of 1% and a false acceptance rate of 0.5%, and had a Equal Error Rate of only 0.8%(1).

The sensor device used in this system can be embedded in a variety of equipment. Embedded in a wall, it could be used for access control to secure areas. Integrated into part of electrical equipment, such as personal digital assistants, it could be used to authorize user access to the device. In public spaces or medical facilities where hygiene is a particular concern, the contactless feature of this system makes it especially appropriate.

Biometric identification has uses other than security: it can be used to authenticate an individual's identity in order to provide services customized for that user, to confirm ownership of luggage in travel or packages in shipment, or as a way to sign in at work or take attendance at school. These are just a few of the potential applications of this technology.

Fujitsu plans to test this technology in a variety of practical applications and offer a variety of authentication solutions to the market.

Founded in 1968 as a wholly owned subsidiary of Fujitsu Limited, Fujitsu Laboratories Limited is one of the premier research centers in the world. With a global network of laboratories in Japan, China, the United States and Europe, the organization conducts a wide range of basic and applied research in the areas of Multimedia, Personal Systems, Networks, Peripherals, Advanced Materials and Electronic Devices.
For more information, please see: www.labs.fujitsu.com

All company/product names mentioned may be trademarks or registered trademarks of their respective holders and are used for identification purpose only.

Please understand that product prices, specifications and other details are current on the day of issue of the press release, however, may change thereafter without notice.