Commendation for Science and Technology by MEXT 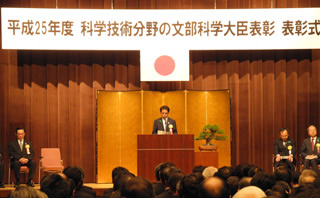 Due to the popularity of digital terrestrial broadcasting and large-screen television sets, video content is increasingly displayed with high-definition (HD) images. In addition public internet networks such as FTTH are increasing the speed and reducing the price of public internet. As a result, there was a need for new technology to be developed for recording and transmitting HD images at a low rate, with high quality, and at low cost.

With these developments, the winners became the first to develop a digital video coding LSI and a transmission system that met this need. The technology has since been applied to various consumer products such as PCs, cameras, and recorders. Now everyone can easily enjoy high-quality HD images and broadcast stations are able to utilize HD images in a wide range of areas because they can transmit these for professional use at low cost via a cheap public IP network. 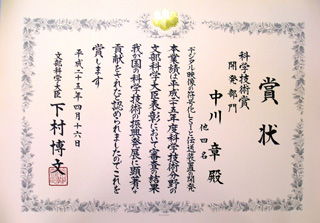 Award certificate from the Minister of Education, Culture, Sports, Science and Technology