Manufacturers across the board want to enhance factory production efficiency. Of all the different approaches to streamlining production, the Internet of Things (IoT) holds enormous potential. Fujitsu recently teamed up with Intel Corporation to create a solution that leverages the IoT into visualizing status information on a factory-wide scale. By rolling the solution out across the world, Fujitsu is looking to make a positive contribution to the global environment.

In the effort to create a sustainable society, manufacturers of all kinds are faced with the challenges of improving factory production efficiency and minimizing their environmental impact. Since 2015, Fujitsu has been working with Intel Corporation (Intel), a leading American semiconductor manufacturer, to develop IoT-driven solutions for optimizing factory operations. As part of that effort, Fujitsu and Intel began a collaborative verification of the new system in April 2017 at Intel's Penang factory (Malaysia), the company's largest semiconductor factory outside the United States. The system uses IoT to visualize the factory's overall status, including energy usage and the operating status ofsemiconductor production lines.

The Penang factory used to collect information on energy consumption and other environmental data on a monthly basis, gather data on production line operations by the equipment unit, and apply the information in various capacities, including efforts to improve production efficiency and identify the causes of equipment problems. However, management could not get a timely grasp on that data, which delayed responses. Management also lacked information on energy consumption and related costs, making it hard to establish a comprehensive, integrated understanding of all the data. The factory had trouble turning that information into facility-wide efficiency improvements.

The new system uses Intel® IoT Gateway and other offerings to collect a variety of environmental data from on-site electricity and water meters, gather operational status data from the production lines, and then manage the information in a centralized fashion. Incorporating Fujitsu's analysis and visualization tools, the system also displays cohesive visualizations of key indicators on user monitors. The system thus enables up-to-the-minute monitoring of production lines facing problems and provides users with daily detailed updates on multiple indicators, giving management the ability to implement countermeasures in real time. Fujitsu has developed the system into a factory optimization solution, which it began offering on a global scale in May 2017. 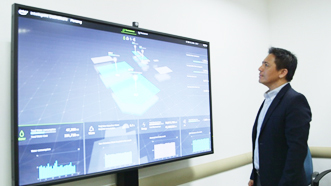