In FY 2017, Mie Fujitsu Semiconductor Limited updated our chillers for our office area. As a measure against climate change, we selected and installed a chiller which is effective in terms of both reducing energy and reducing refrigerant fluorocarbon load. By installing a high-efficiency inverter-type centrifugal chiller, we were able to reduce the amount of CO2 emission associated with energy consumption by 70% (CO2 reduction amount: 2,743 tons/year). Also, we now use hydrofluoroolefins (HFO) as new refrigerant, making it possible to reduce the global warming coefficient from the previous 1,300 times to 1 time (not subject to the Act on Rational Use and Proper Management of Fluorocarbons JAPAN).

By using this chiller, we are contributing to suppression of global warming caused by leakage of fluorocarbons at the time of installation or maintenance. We will continue to select and install environmentally-friendly equipment. 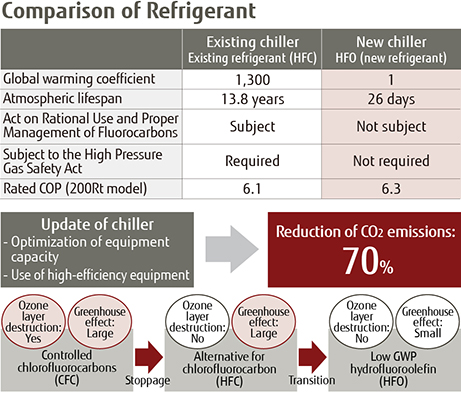 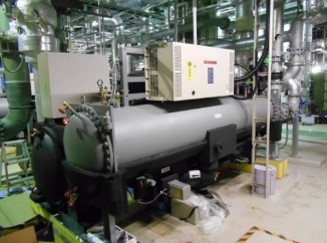 Fujitsu's Numazu Plant participated in "Demand Response (Negawatt Trading) Verification Testing" conducted by theMinistry of Economy, Trade and Industry. In the verification testing, the company cooperates in suppressing the demand for power during a set period of time when requested (advance notification) by a power company. Incentives (monetary subsidies in the case of verification testing) are given according to amount of decrease and other results. At the Numazu Plant, the methods of suppressing the demand for power (peak cut) included adjusting the operational output of gas engine generators in light of the plant's forecasted demand and utilizing smart switch (Comverge, U.S.) remote operation/control to stop air-conditioning devices, adjust temperatures, etc. In fiscal 2016, we were able to accommodate requests twelve times for a total of 124 MW.