※Provision of Mobile Photo System and Cloud Services ended.
Thank you for your cooperation.

Investigation of Wild Animals and Plants Is Difficult!?

For the purpose of conserving biodiversity, various entities including municipalities, universities, research institutions, NPOs and companies are conducting research activities in various regions to investigate the habitat and growth conditions of wild animals and plants. While there are various investigation methods available such as remote sensing and fixed point observation, the method to conduct field surveys on foot tended to require considerable man-hours and high costs to secure enough investigators and enough area of investigation covered.

The mobile photo system is a system that stores photo images sent via emails from mobile phones and smart phones with a GPS function into a database. Obtained data can be viewed through the Internet as map information. By people taking and posting pictures of animals and plants, the mobile photo system realizes a citizen-participation-type investigation system that collects and manages a large amount of biodiversity data. 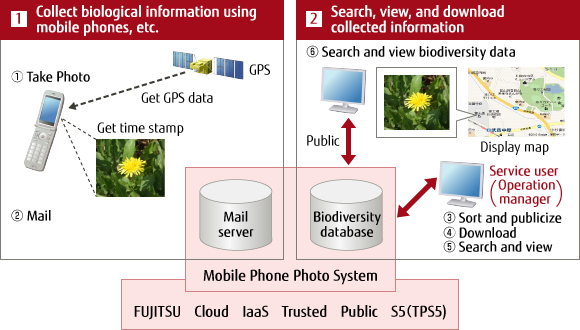 As the mobile photo system uses smart phones and mobile phones that are part of the social infrastructure, it has the following advantages:

As part of our CSR activities, we assist promotion of biodiversity conservation by providing a mobile photo system and cloud services to relevant research projects.

As of FY2013, we have received more than 1,300 pictures of bumblebees submitted from all over Japan. By applying a method called a niche model to the obtained data, we have estimated the habitat distribution for several species. It was especially truly informative to be able to narrow down potential environmental factors, etc., that affect the inhabitation of Bombus ardens, Bombus sapporensis, Bombus diversus, and so on.

We have used this service in our practice sessions for the past year. As a result, we could upload about 2,600 items of reliable data, mainly taken by our students. It seems our students have become skilled in handling the system through the project. For FY2014, we are planning to concentrate on collecting information of our target species.

Information on Investigations Conducted by Organizations Using the Services

Information of investigations conducted by the organizations is available here.

Let's Find the Creatures of Kurashiki!

Kurashiki City is promoting a "Regional biodiversity strategy", a project for saving the living of citizens and the future of the nature. Data about creatures residing in Kurashiki City are precious pieces of information for understanding the current condition of the natural environment.