The National Astronomical Observatory of Japan (NAOJ) initiated a leading-edge project to build the world's largest (8.2-meter inner diameter) optical-infrared telescope on Mauna Kea, Hawaii. The challenge lay in setting up a world-class research facility overseas that could transfer observation data to the base facility in Hilo, Hawaii and to the NAOJ headquarters in Mitaka, Japan. Given the hostile environment at a height of 4,200 meters and pressure of 0.6 bars, NAOJ needed a flexible, robust solution offering a high degree of fault tolerance and cooling efficiency. Building a large-scale research facility in foreign terrain also called for a partner with international reach. 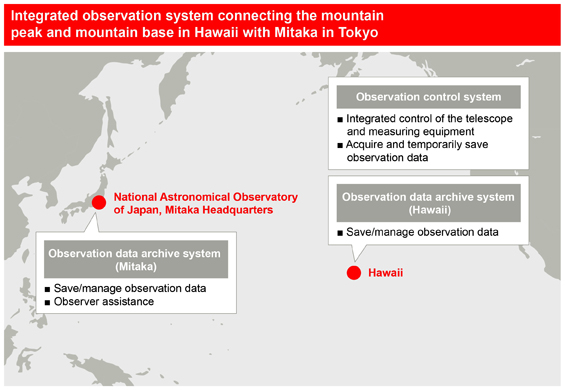 Building on a 30-year partnership and several successful astronomical projects, NAOJ selected Fujitsu to build the observation control system and observation data archive system for the Subaru telescope(note 1). Key factors in favor of Fujitsu included its global support capabilities, proven system integration expertise in the field of astronomy and ability to develop a uniform, end-to-end architecture covering all solution layers from observation control and data collection through to storage management and data analysis.

Observation control system For maximum reliability and usability, Fujitsu used PRIMERGY servers, PRIMEPOWER UNIX servers and ETERNUS storage systems to build the observation control system. It controls the telescope's direction and positioning, capturing huge volumes of observation data (approximately 50 GB per night, with approximately 10,000 files) and transfers this data to the observation data archive in Hawaii. Observers can easily control the telescope by pointing it, for instance, at a particular astronomical object.

Observation data archive system Up to 20 MB of data is transferred every second by the various Subaru observational instruments. To accommodate this data stream, Fujitsu developed a data archiving and management solution with PRIMERGY servers, PRIMEPOWER UNIX servers and ETERNUS storage systems. Data is mirrored between Hawaii and Japan to ensure redundancy. Approximately 4 million files are currently stored.

Global support from Fujitsu was a key success factor for this project ? helping to smoothly bridge the gap between Japan, the US and Hawaii. The Subaru telescope functions reliably, streaming massive volumes of data every day to the archiving systems in Japan and Hawaii. Astronomers from all over the world have access to this data, paving the way for new scientific breakthroughs and insights.

The Subaru Telescope has already enabled great scientific discoveries. Sensitive cameras with advanced technology have captured sharp images leading to the discovery of objects in the exotic world beyond our solar system. This is allowing scientists to explore exoplanets, namely planets orbiting stars other than the sun. These reveal a wide range of environmental conditions.

In addition, the Subaru Telescope helped to discover the farthest galaxy ever. This was enabled by wide-field imaging, followed by an accurate measurement of the distance. Such galaxies give valuable insights into the history of the Universe by revealing the conditions that prevailed in the past.

The Subaru telescope is a large optical-infrared telescope with one of the world's largest single mirrors and an inner diameter of 8.2 m. It is located on the summit of Mauna Kea (4,205 m altitude) on the island of Hawaii.