Fujitsu R&D Center today announced a wireless positioning and tracking technique based on multipath profile fingerprinting and particle filter. The technique doesn’t require any synchronization among transceivers, reducing the complexity of positioning system structure. Their indoor positioning system takes advantage of multipath propagation characteristic to improve accuracy, and utilizes two-step (or called coarse-fine) positioning method to realize asynchronous wireless localization. Their tracking is based on particle filter augmented by map matching technique, and the positioning and tracking accuracy can reach up to 1-meter level performance. This technique can be easily and low-costly applied to many indoor LBS applications.

Details of this technique is also presented at the 2016 IEEE 84TH Vehicular Technology Conference: VTC2016-Fall, opening on September 21 in Montreal, Canada.

The market of location based service (LBS) has been increasing dramatically in recent years. Positioning technique is one of the important parts in LBS structure. In indoor area, the positioning technique can be applied in shopping mall, museum, exhibition hall, parking lot, hospital, warehouse and so on. It can be used for the services like accurate advertising, navigation, goods management, and also used for the development of indoor virtual reality games. High-precision indoor positioning technique could enhance the quality of LBS, providing human with better digital services.

In general, global positioning system (GPS) is invalid for the indoor LBS. The traditional time of arrival (TOA), time difference of arrival (TDOA) based indoor wireless positioning systems suffer from none-line-of-sight (NLOS) propagation, multipath effect and shadowing effect. In addition, these systems require the transceivers to be precisely synchronized, which results in the systems to be more complex.

Fujitsu R&D center developed the indoor positioning prototype based on software defined radio (SDR), as shown in Figure 1. The indoor transmitter can send the reference signal of wireless network, like GPS when GPS is invalid in indoor environments. The receiver extracts the multipath profile (MP) and received signal strength (RSS) from the received signals. Then the terminal will estimate the location to realize the indoor localization technique. 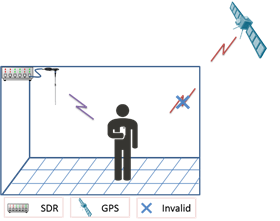 To realize asynchronous positioning, the technique first uses RSS fingerprinting to locate the target into a coarse area as shown by the pink area in Figure 2. Then the multipath profile fingerprinting gets the fine location estimation by matching the online profile with the profiles at the RPs in the coarse area. The matching between multipath profiles needs to first align the two profiles based on maximum correlation criterion, as shown in Figure 3. The similarity between two denoised profiles are calculated in terms of vector cosine value. The best matched RPs with largest similarities are finally selected to estimate the fine location. 2. Particle filter based on map matching

Particle filter consists of essentially three steps: particle state prediction, weight updating, particle resampling. In this tracking system, the particle state prediction is based on a robust motion model, which assumes that the step length and heading are random variables drawn from uniform distributions. Compared with traditional method, the weight updating introduces another constraint probability via map matching. The system will find a path that closest to the last location estimation, and then the constraint probability is calculated as a function of distance between the particles and the path center. Figure 4 demonstrates the proposed particle filter model. The technique has been tested in the office of Fujitsu R&D Center. The results show that the positioning and tracking system can reach up to 1-meter level accuracy. This technique has the following advantages.

Currently, the particle filter model in this technology is only adapted for the medium/low moving speed occasions. To get high-precision tracking result in a high-speed moving occasion, Fujitsu R&D Center will focus on the solution based on fusion with inertial measurement unit (IMU). Furthermore, they will press forward the practical LBS applications in the future.