Overhead scanner captures images of open books or magazines, reproduces a distortion-free image as if scanned from a flat document

Fujitsu Research and Development Center Co., Ltd. of China and Fujitsu Laboratories Limited today announced the development of a technology that compensates for the curvature in open books or magazines, flattening out scanned images to produce an easy-to-read document.

Up until now, there have been several ways to compensate for distortion when scanning bound documents. One of these methods involved projecting a special pattern onto the pages. The nature of the distortion would be inferred based on the changes to that pattern. In another method, the pages would be photographed using two cameras to infer the nature of the distortion, and then image correction processing would be performed. There are correction methods that use only one camera, but after correction, characters may be vertically stretched depending on their position on the page, making legibility a problem. Fujitsu has developed new technology to flatten the distortion in the scanned image by accurately detecting the outlines of the pages and inferring the height of the document’s curvature.

This technology makes it possible to produce an undistorted, highly legible image using only one camera to scan a book or magazine.

Details of the new technology will be introduced at the Twelfth International Conference on Document Analysis and Recognition (ICDAR 2013), to be held on August 25-28, 2013 in Washington, DC.

As tablet computers have exploded in popularity, users increasingly want to be able to view documents electronically, anytime and anywhere. But the compact scanners that are already in widespread use require that pages of bound documents be detached which has led to demand for a way to scan these pages while still in their binding.

One way of avoiding having to cut away the binding of a bound document is to photograph its open pages with a camera. But a photograph of an open book or magazine tends to be hard to read because of the curvature of the pages (Figure 1). Up until now, this has been corrected by projecting a special pattern on the pages and inferring the distortion based on the way the pattern changes, or by photographing the spread with two cameras and inferring the distortion based on that. But both of these approaches require special equipment, making these methods expensive. While it is possible to use a single camera to correct distortions, it is difficult to make accurate corrections, as characters near the spine of the book tend to get vertically stretched in the process. 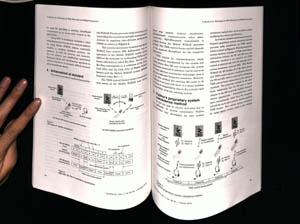 Figure 1: A sample photograph of a bound document

Fujitsu has developed a technology that corrects distortion in pages of bound documents and produces flattened scanned images by accurately detecting the outlines of pages in photographs and inferring the height of the document’s curvature. Details of the technology are as follows.

2. Distortion correction that takes the height of the page’s curvature into account

This technology infers the curve height of the page at various locations based on the detected outline and corrects the scanned image’s distortion. Based on the outline, it infers the difference in curve height between one point and an adjacent point, and when the difference is great (when the machine determines the curvature appears to be great) it applies a correspondingly increased level of correction. Conversely, when the difference is small, the technology interprets that as little curvature, and the applied level of correction is accordingly weaker. This allows for accurate correction without vertically stretching characters near the spine of the book.

When capturing the image of the open pages of a bound book or magazine using an overhead scanner, the image of fingers being used to press down the pages of the document may also be incidentally captured. To improve the appearance of the image, the technology automatically searches for these areas where fingers have been included in the scan and removes them from the image.

Working with a two-page A4 spread at the equivalent of 300 dpi resolution, this technology achieved roughly 90% accuracy during the page-outline detection phase in just 1.3 seconds. 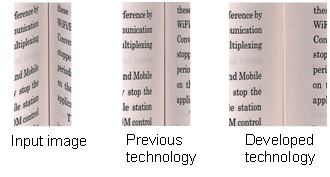 This technology was able to correct the distortions arising when a bound document was photographed using an overhead scanner and produce a flat, legible scanned image, making it possible to achieve good legibility without detaching the pages of bound documents.

Fujitsu Laboratories plans to continue increasing the resolution of this technology.

Fujitsu is the leading Japanese information and communication technology (ICT) company offering a full range of technology products, solutions and services. Over 170,000 Fujitsu people support customers in more than 100 countries. We use our experience and the power of ICT to shape the future of society with our customers. Fujitsu Limited (TSE:6702) reported consolidated revenues of 4.5 trillion yen (US$54 billion) for the fiscal year ended March 31, 2012.
For more information, please see: http://www.fujitsu.com