Human Machine Interface (HMI), Man Machine Interface (MMI) or Computer Human Interface (CHI) defines the function of a person interacting with a piece of entertainment, work-producing or otherwise intelligent electronic device. The impact of the touch interface on this functionality has never been talked, discussed, written or blogged about with more intensity and interest than in recent times. Touch technology has always been regarded seriously; it just simply has not been in the public view or mindset, or in general use to the extent it has since the advent of the iPhone and iPod. It is important to note that while the technology is pretty slick, it is the interface’s elegant functionality that has captured the attention of so many people, which of course would not be possible without touch technology.

This sudden surge in popularity is a vindication of sorts for those who have promoted the use of touch interface technologies for so many years. Yet, there is a downside to this popularity. Design engineers now have new and sudden demands to develop products that incorporate touch, and many in this group have little or no experience dealing with the challenges. 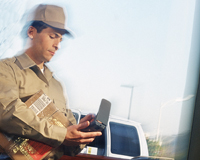 Incorporating touch into a wireless product design introduces additional complexity with radios, antennas and the attendant higher power consumption. Although none of these challenges are insurmountable, they do require careful consideration of electrical and mechanical design and close attention to details, which includes the touch interface. For this article, let’s assume that the wireless device designs are portable and battery powered.

If a wireless design is going to include a touch interface, it is important to determine early in the design cycle which type of touch interface will be used. The exact details of mechanical and electrical properties usually can be resolved during normal design progression. However, the two main touch technologies used for portable devices - Analog Resistive and Projected Capacitive - have quite different requirements both electrically and mechanically. Since these are the two leading technologies currently being implemented, it’s important to understand the basic differences and their implications.

At the heart of both touch technologies is the touch controller. The touch controller is essentially the brain of the touch system. It contains A/D circuitry, a microprocessor, and a data interface that enables communication with the system processor. The controller powers the touch panel, controls the excitation, and interprets the information received from the touch panel. The controller also filters the returning touch data and converts it into raw touch coordinates, which are then sent to the system via an industry-standard protocol such as SPI. Other desirable features common to both touch technologies include: minimal power consumption during touch activity, near-zero power consumption between touch activities, good ESD protection, programmable features, and substantial error-checking to detect abnormal or inconsistent touches and filter them out. 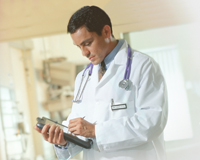 The design community is most experienced with Analog Resistive touch because it has been in use for many years. Most designers know how to implement it, and the choice of touch panels and controller solutions is plentiful. Conversely, Projected Capacitive touch for small form-factor devices, such as handheld and portable wireless products, has been around for a relatively short time, thus limiting the available community of knowledge and design experience with it, as well as the choices for panels and controllers.

Controller chip availability may not seem as relevant when designing a highly integrated product where touch control functionality is embedded in a multifunction microprocessor, but design modeling and prototyping are much easier if there is an available, off-the-shelf control element for bread-boarding. Establishing control/response metrics early on with a less highly integrated physical model is much easier if the designer knows the ideal characteristic model of the touch panel function before it’s integrated. Otherwise, it is unknown if the integrated device is functioning at an optimum performance level. Further, if - or when - co-dependent design problems arise, some of the controller signatures may be helpful in defining solutions. This applies to both Resistive and Projected Capacitive types. Although Resistive has been around for years, designers even today still make basic mistakes in their design assumptions and end up with poorly performing interfaces. A typical example is slow response time and/or poor sensitivity.

Projected Capacitive typically has four times the number of physical interconnects between the controller and touch panel. The control signals and algorithms are also quite different from Resistive. These considerations indicate that learning how it works with a purpose-designed controller would be very beneficial. With either technology, failure to do so can result in undesirable design changes — and no one wants to tell the boss they need to re-spin a board!

Another design consideration is to implement a dedicated controller IC. This may actually simplify the design and provide higher system performance. The advent of highly functional touch controllers in tiny packages can eliminate many, or even all, external discrete components while saving board real estate, power, component cost, etc. Examples of such Resistive controllers are the Maxim MXB784x and new MAX11800/11801 series. As yet, in the nascent Projected Capacitive controller market, choices are much more limited. Here, customization is typically the more practical approach.

If performance is the key metric, other areas, though not new, also offer design challenges. These include externally radiated and absorbed EMI/RFI, power quality, and internal signal interference, but hopefully, the designer is already familiar with these issues. In any case, gaining intimate knowledge of proper touch control circuit function is essential.

Radiated interference can be both internal and external because the touch panel can be a receiving or transmitting antenna. External problems, for agency approval purposes, need to be mitigated internally, typically at the board level, but sometimes it is a signal coupling problem between conductors. LCDs can have high-speed, fast transient signals that couple to the touch panel. In this situation, such signals can look like noise to the touch panel, as it is essentially a low signal level analog device. Coupling of wireless radio signals can affect touch performance and require a shielding or location adjustment to remedy. For a quick interference demo, just observe what happens if a cell phone is too close to a PC with the audio turned up.

Power quality is a concern from two perspectives: noise and accurate voltage level. Power control is a huge issue in portable battery life management, with very low-level management of powered circuit elements to minimize power use. As such, it is possible to create situations where noise is introduced either from switching or improper voltage levels. If the voltage level is not maintained at minimum levels for the touch control, there can be intermittent functionality, poor performance, or both.

Internal signal interference can affect the touch panel’s performance and the touch panel drive signals can also affect other circuits. With circuit voltages pushing ever lower, the 3 to 5 volts used for touch become a more significant factor.

Lastly, remember that designing touch into a wireless product can be greatly simplified by relying on the design knowledge and experience of the vendor’s application engineers and using all available tools to model even preliminary designs. The designs will be better and the products more successful.