Sunnyvale, CA, March 31, 2017 - Fujitsu Laboratories of America, Inc. (FLA) today announced the development of Guided Play, a technology that enables smart sensing and adaptive coaching for populations with restricted and repetitive behaviors (RRBs) such as those affected by autism and Alzheimer’s.
Individuals on the autism spectrum often exhibit repetitive behaviors. As an example, a child with autism may line up toys, stack blocks, and spin objects obsessively. These behaviors can be a way of coping with certain challenges in everyday life, but they may also limit the individuals’ involvement in other activities. Restricted and repetitive behaviors (RRBs) are considered a core symptom and treatment target of many neurological conditions. Early recognition and intervention of these symptoms can significantly improve treatment prognosis and lower long-term costs.
Guided Play is a technology developed by FLA that provides assessment and intervention for a subtle form of RRB – insistence on sameness. The technology utilizes everyday objects such as toys to sense a child’s repetitive behaviors and coaches the child to play in a more flexible way, a fundamental step towards improvements in other developmental areas such as social skills.
With Guided Play, parents can have deeper insights into their child’s play skills and receive an early warning when there is a sign of developmental disorders such as autism. Behavioral analysts can use this technology in their patients’ behavioral intervention and monitor treatment progress continuously.
This technology has been released as the app “Guided Play”, which is freely available on the iOS app store. FLA is currently conducting trials of the technology with the Center for Autism and Related Disorders (CARD). Early results show that the technology successfully captures distinctive behavioral profiles in children with autism. The trials will next test the effectiveness for increase children’s behavioral variability. More information can be found at: http://www.guidedplay.toys

Autism is one of the most prevalent developmental disorders affecting 1 out of 68 children. Autism’s economic costs for 2015 are estimated to be $268 billion in US and may rise to $461 billion by 2025. Since it is not curable, the best practice for autism is early diagnosis and intensive intervention. Autism can be reliably diagnosed as early as 18 months of age, but on average the initial diagnosis in the US happens at approximately 4 years of age, mainly because of lack of awareness and medical resources. A young child with autism is recommended to receive 25 to 40 hours per week of intervention in order to make steady progress. Technologies that facilitate early diagnosis and intervention can significantly lower the costs of autism treatment.
Restricted and Repetitive Behaviors (RRBs) are one of the core symptoms and diagnostic criteria of many neurological conditions, for which a pattern of multiple types of RRB can be an early indicator of their onset. RRBs are also a frequent target of behavioral interventions. The most widely used intervention technique is Applied Behavior Analysis (ABA), which increases positive behaviors using reinforcement procedures.

Despite the availability of smart sensing technologies that can recognize some types of RRB, more subtle forms of RRB such as insistence on sameness are not supported. For example, when playing with toys, many children with autism tend to play in stereotypical ways (e.g., stacking and lining up toys). Interventions for these behaviors are also labor intensive and thus expensive.

Guided Play is among the first digital solutions that can measure invariance in object manipulation and provide behavioral intervention using principles of Applied Behavior Analysis (ABA). It turns a game or smart toy into a platform for behavioral sensing and coaching. We call such a game or toy “the apparatus”. Guided Play inserts an instrument into the apparatus which then acts as a sensing and communication plug-in. An instrument can be a wireless sensor embedded in a smart toy or a software component running inside a computer game. 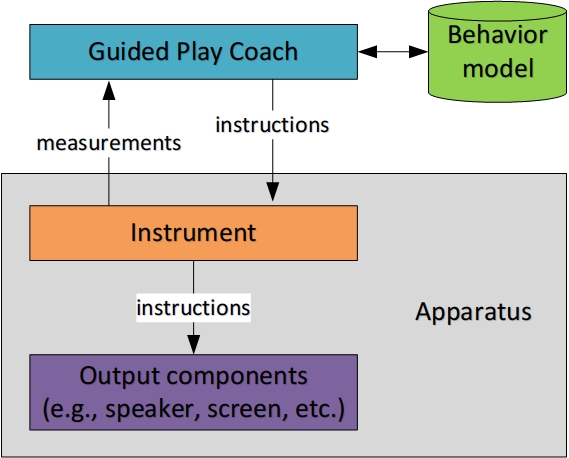 Inspired by the principles of ABA, Guided Play embodies the following steps: 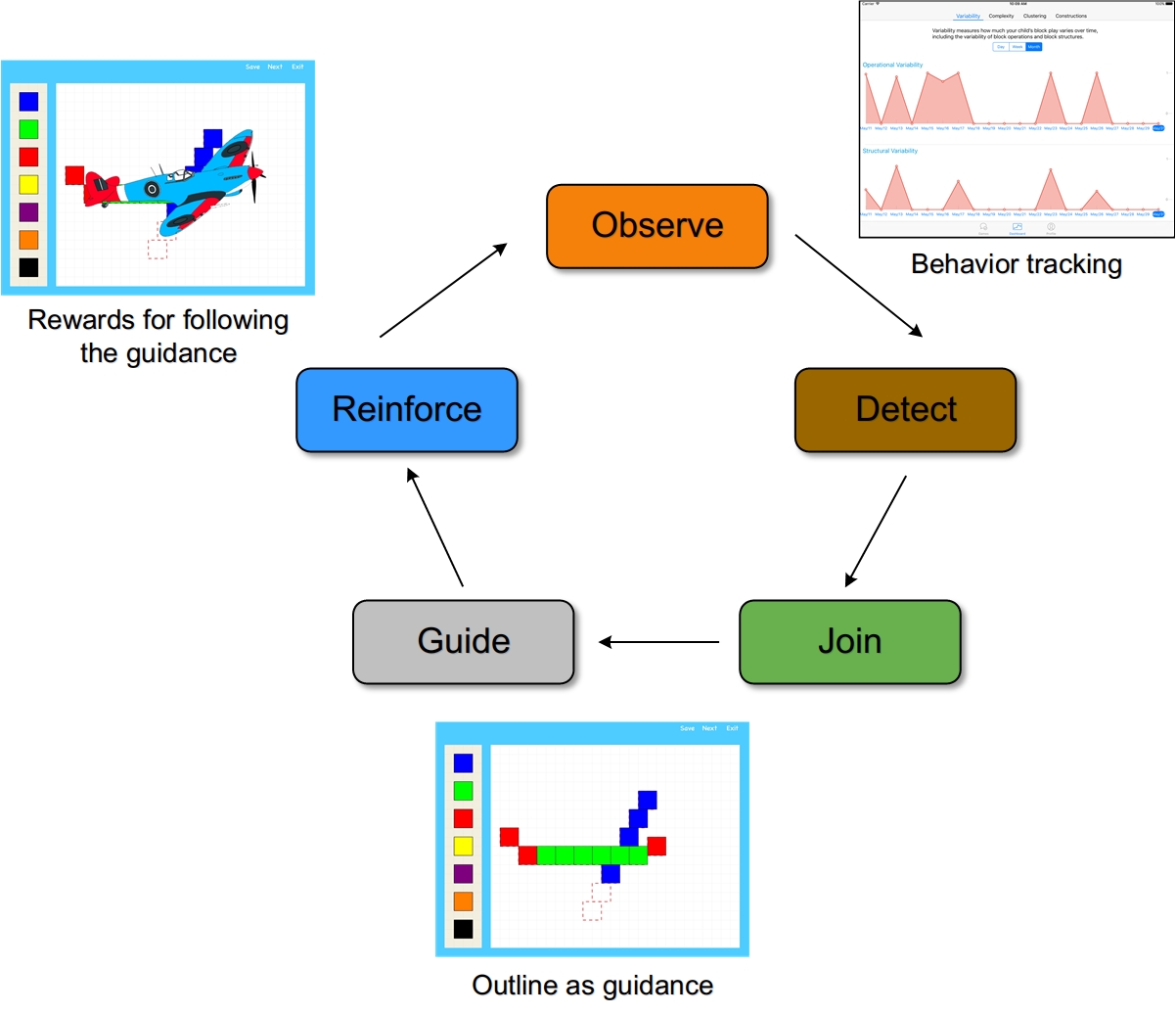 Guided Play makes it possible to monitor a child’s development in a natural environment and at an early age. Parents can find out precisely when their child reaches a hard-to-notice milestone (e.g., stacking blocks), how the child’s play skill is in comparison to peers, and whether the child’s behavior shows any developmental concerns. People with other conditions with repetitive behavior such as dementia may use the technology to monitor the progression of their symptoms.
For behavioral intervention professionals, Guided Play can automatically collect behavioral data and monitor treatment progress. It is also a therapeutic tool for teaching flexible play, a first step towards improvements in many other developmental areas such as social skills.

Fujitsu Laboratories is conducting trials of the technology in the assessment and coaching of children with autism in collaboration with the Center for Autism and Related Disorders (CARD), one of the largest autism treatment organizations in the world. Our current data shows that the technology successfully captures distinctive behavioral profiles in children with autism. The trials will continue to evaluate its effectiveness for increasing behavioral variability and flexibility.
As the world becomes increasingly digitally dense (including both hardware and software), traditionally analog and centralized ecosystems are becoming digital and distributed. In many of these ecosystems, humans are still in the loop in terms of making decisions and carrying out actions. Guided Play is an example of Fujitsu Laboratories’ effort to enable human-machine collaboration in today’s digitally dense world by leveraging the cognitive and data sciences.

About the Center for Autism and Related Disorders (CARD)

CARD treats individuals of all ages who are diagnosed with autism spectrum disorder (ASD) at treatment centers around the globe. CARD was founded in 1990 by leading autism expert and clinical psychologist Doreen Granpeesheh, PhD, BCBA-D. CARD treats individuals with ASD using the principles of applied behavior analysis (ABA), which is empirically proven to be the most effective method for treating individuals with ASD and recommended by the American Academy of Pediatrics and the US Surgeon General. CARD employs a dedicated team of over 2,000 individuals across the nation and internationally. For more information, visit www.centerforautism.com or call (855) 345-2273.