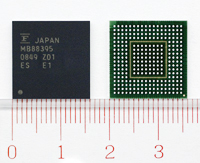 The Fujitsu MB88395 uses a high-speed 800Mbps physical layer and link layer, along with the Fujitsu proprietary SmartCODEC, which provides high compression and can transmit HD video without perceptible latency. This combination brings the rich-HD experience to rear-seat entertainment, reduces vehicle weight and improves fuel efficiency. The combination reduces the system cost of in-vehicle multimedia networks by up to 30 percent, while reducing the number of wire harnesses by a maximum of 70 percent, and can reduce the environmental impact by approximately 10kg of carbon dioxide (CO2) per year for a car traveling 10,000km. That roughly translates to the amount of CO2 a beech tree absorbs in one year.

The MB88395 also incorporates the Digital Transmission Content Protection (DTCP) encryption protocol that prevents unauthorized duplication, download or alteration of audio or visual media. The new controller complies with the 800Mbps specification of the 1394 standard, doubling the 400Mbps data rate of the previous controller from Fujitsu Microelectronics.

“The 1394 Automotive standard is now moving forward for in-vehicle multimedia networking, and we expect it to become the preferred automotive networking standard for entertainment, information, and other applications,” said Philip Hughes, senior director, Automotive Business Group, Fujitsu Microelectronics America. “Fujitsu Microelectronics anticipated the need for rear-seat entertainment and has taken a global leadership position in 1394 controller technology. This new device, co-developed with Fujitsu VLSI Limited, allows HD video content to be easily viewed throughout the vehicle. We expect this new 1394 Automotive in-vehicle networking technology will be in vehicles in the 2011 and 2012 model years." 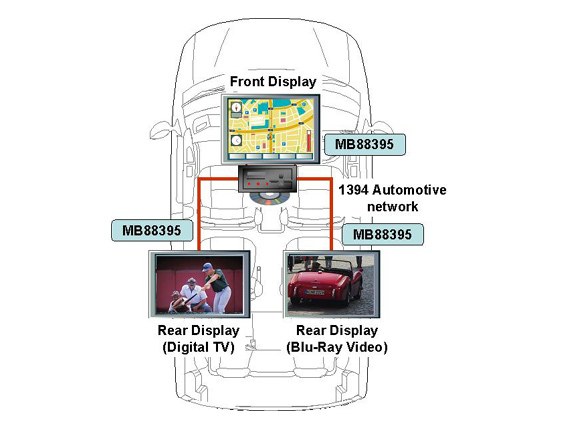 Factors involved in making 1394 essential for the upcoming growth of digital transmission in vehicle networks include the gradual shift to digital TV worldwide, the increased availability of HD content, and the 2013 phase-out of analog output from Blu-Ray players.

“Honda R&D welcomes the MB88395, the first IC to provide the 800Mbps speed of the 1394 Automotive specification," said Yuji Kawaguchi, Operating Officer of Honda R&D Co., Ltd. "The importance of high-speed digital transmission will increase further in the future to handle in-vehicle multimedia as well as to reduce weight. 1394 Automotive is an in-vehicle network that can enrich entertainment and comfort. We plan to promptly evaluate the MB88395.”

The Fujitsu SmartCODEC, which compresses video to one-quarter its original size, has been consistently improved over previous generations. The SmartCODEC, which was developed by Fujitsu Laboratories, is used in the BT.601 Transport Over IEEE-1394 standard, a transport protocol for sending video streams (YUV, RGB) over 1394 (see press release http://www.fujitsu.com/us/news/pr/fma_20071105.html). The SmartCODEC can compress and decompress high-resolution video in two to three milliseconds without any perceptible time lag or out-of-sync content. This resolves latency issues that can be a problem when different viewers are watching the same content on the front and rear monitors.

The controller can transmit HD video from Blu-Ray DVDs and digital TV, as well as high-resolution navigation images. For example, an HD video stream (1,280 dots x 720 lines) from a Blu-Ray DVD that has been decompressed has a rate of 885 Mbps. With subsequent compression by the SmartCODEC, the rate becomes 249Mbps, so two channels can be transmitted in the 800Mbps bandwidth.

Fujitsu Microelectronics plans to expand its lineup of 1394 controllers to handle the increasing information streams in vehicles, such as video content and peripheral cameras, and also to reduce system costs. These in-vehicle networking chips complement Fujitsu Microelectronics’ strong presence in automotive ICs for processing graphics and video.

Fujitsu Microelectronics will be speaking at and demonstrating the new controller at the 1394 Auto Technology Seminar to be held in Dearborn, Michigan, on April 30 (http://www.fujitsu.com/us/news/events/fma_20090430.html). 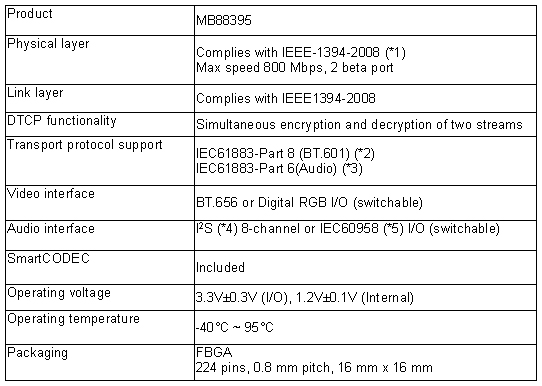 (*1) IEEE-1394-2008: An extension to the older IEEE1394a-2000 high-speed serial-bus standard used for PCs and audio-visual equipment. Enables faster transmission speeds and transmission across longer distances. This standard has also been has been adopted for IDB-1394.

(*2) IEC61883-Part 8 (BT.601): IA transmission protocol established by the International Electrotechnical Commission, for digital interfaces of audio and visual equipments. BT.601 Transport Over IEEE-1394 is in the process of being ratified as Part 8.

Fujitsu Microelectronics America, Inc. (FMA) leads the industry in innovation. FMA provides high-quality, reliable semiconductor products and services for the automotive, wireless, industrial, consumer, and other markets throughout North and South America. As a founding member and current board member of the WiMAX Forum™, Fujitsu supports the standards development and compliance programs that are essential to successful Broadband Wireless deployment. Fujitsu provides performance-driven WiMAX solutions by leveraging the company's experience and expertise in the networking and communications markets. Fujitsu offers flexible WiMAX SoC and reference designs for WiMAX-certifiable systems to equipment vendors. For more product information, please visit the company's web site at http://us.fujitsu.com/micro/WiMAX or address e-mail to inquiry.bwa@fma.fujitsu.com.