New MB86297 is the Industry’s Most Advanced GDC; Optimizes Performance for High-End Vehicles

The MB86297 GDC is built with a high-performance graphics core that delivers more than five times the performance provided by its predecessor, the MB86296 graphics display controller. The MB86297 is specifically designed for the latest generation of automotive information/entertainment systems, including head-end units and fully configurable instrument clusters that require high quality and versatile human-machine interfaces.

The MB86297 supports all 2D functions, 3D functions, and fogging and lighting, to provide dramatic and realistic 3D effects. The GDC enables point-of-view and bird’s eye navigation to be rendered very rapidly, while producing images that match those available with desktop graphics. The maximum power consumption of the MB86297 is under 2.3 watts, far below other GDC products of similar performance.

“Fujitsu is extending its leadership in 3D graphics display technology for vehicle navigation systems with this new graphics display controller,” said Dan Landeck, senior marketing manager for Graphics Display Controller products at FMA’s Embedded Systems Solutions Business Group. “The MB86297 is the most advanced GDC designed for automotive applications, with layering, blending, video capture, dual monitor support, and drawing performance at up to 10 million polygons per second. It will help Fujitsu add to its share of the graphics display controller market, which now exceeds 50 percent worldwide.”

“The stack is RTOS-agnostic, but Fujitsu is working with the major RTOS vendors to enable native support for the MB86297,” said Landeck.

The MB86297 incorporates two digital RGB display output channels with resolutions ranging from 320 x 240 up to 1280 x 1024. Several intermediate resolutions are also available. Unlike other dual-monitor GDCs, the MB86297 will drive two displays that have two different resolutions, such as a head-end display and an information display located in or around the instrument cluster.

For each output display channel, eight layers support alpha blending where a transparency value is applied evenly to the entire layer. Four of the layers are designated as alpha planes, enabling transparency at the pixel level. The alpha-plane function lets users create special effects such as spot lighting on maps, and the ability to zoom in and out of icons or menus to and from lower layers.

The MB86297 also supports two independent video capture ports for YUV/ RGB input. The GDC will perform various operations on the video including up/down scaling, and brightness, contrast and saturation control. All the I/O ports are independent, non-multiplexed, which means no pins are shared, enabling all features to be utilized simultaneously.

The GDC’s programmable geometry engine is capable of drawing up to 10 million polygons per second and can render 250 million pixels per second. The MB86297 includes a PC166 host interface and a 64- bit DDR memory bus rated at 266Mbit/second (133MHz). 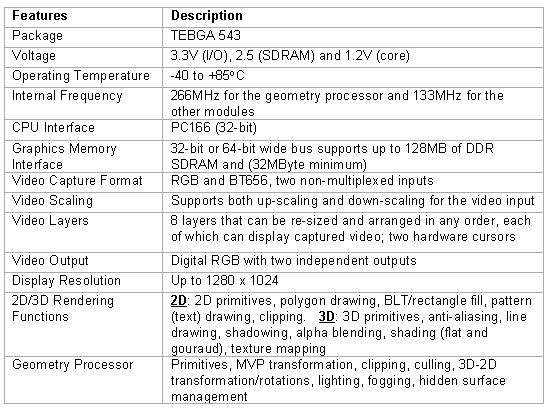 Fujitsu Microelectronics America, Inc. (FMA) leads the industry in innovation. FMA provides high-quality, reliable semiconductor products and services for the networking, communications, automotive, security and other markets throughout North and South America. As a founding and board member of the WiMAX Forum™, Fujitsu supports the standards development and compliance programs that are essential to successful Broadband Wireless deployment. Fujitsu provides performance-driven WiMAX solutions by leveraging the company's experience and expertise in the networking and communications markets. Fujitsu offers flexible WiMAX SoC and reference designs for WiMAX-certifiable systems to equipment vendors. For more product information, please visit the company's web site at http://us.fujitsu.com/micro/WiMAX or please address e-mail to inquiry.bwa@fma.fujitsu.com