The MB91F465KA and the MB91F464AA serve door, seat, air conditioning and other vehicle body controls. Both include a CAN channel, 32 CAN message buffers and five UART channels that comply with the Local Interconnect Network (LIN) standard. Designed for car navigation, audio, and other information system controls, Fujitsu’s new MB91F467RA includes two CAN channels, either 32 or 64 CAN message buffers, and seven LIN-compliant UART channels. LIN interfaces are used for vehicle door, mirror, and wiper controls.

All the new MCUs run at clock speeds of up to 80MHz, the fastest in the industry, and have embedded Flash memory.

“Automotive systems that use CAN for body and driving control have become widespread,” said Akio Nezu, senior marketing manager for the Embedded Solutions Group at Fujitsu Microelectronics America. “In addition, preventive safety technologies using video processing and other means, intelligent transport systems (ITS), and systems to improve environmental performance are being analyzed for use in vehicles. These types of systems require microcontrollers like the new models we are introducing today that can process information in real time from a wide range of peripheral components.”

Fujitsu offers development chips and tools supporting the MB91460 series, enabling all MCUs, including these new models, to be developed using the same platform.

Fujitsu plans to augment its line of microcontrollers for next-generation, on-board vehicle systems, with new models planned for dashboard and FlexRay controls. 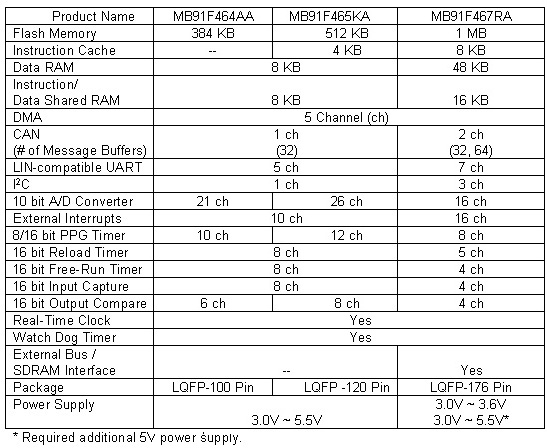 Fujitsu Microelectronics America, Inc. (FMA) leads the industry in innovation. FMA provides high-quality, reliable semiconductor products and services for the networking, communications, automotive, security and other markets throughout North and South America. As a founding and board member of the WiMAX Forum™, Fujitsu supports the standards development and compliance programs that are essential to successful Broadband Wireless deployment. Fujitsu provides performance-driven WiMAX solutions by leveraging the company's experience and expertise in the networking and communications markets. Fujitsu offers flexible WiMAX SoC and reference designs for WiMAX-certifiable systems to equipment vendors. For more product information, please visit the company's web site at http://us.fujitsu.com/micro/WiMAX or please address e-mail to inquiry.bwa@fma.fujitsu.com

Fujitsu in the United States