Contributing to Society through Sports

The Fujitsu Group promotes sports as a building block of a sound society. Company sports encompass the track and field team, the Frontiers American football team, and the RedWave women's basketball team. These organizations share the thrill of sports while building a more prosperous society and contributing to promoting the mental and physical health of people.

Detailed activities for each team are available on the following websites. 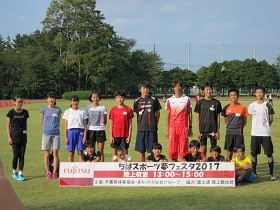 The Fujitsu Track and Field Team is based in Chiba Prefecture. As the Chiba Dream Challenge Fulfillment Team , the team cooperates with the Chiba Prefectural Board of Education to interact with public elementary school and junior high schools through physical education and sports. The goal of the team's activities is to foster dreams and aspirations for sports in children.

The Frontiers are based in the Kawasaki City. In 2006, the city certified the Frontiers as a Hometown Sports Partner. Through its activities, the team contributes to the promotion of sports and an improved image for Kawasaki City. For elementary schools in Kawasaki, the Frontiers work to popularize American football. For example, the team holds a Friendship Classroom to teach flag football, a safe and easy game, in physical education classes. The RedWave is based in the Kawasaki City. In 2004, the city certified the RedWave as a Hometown Sports Partner. Through its activities, the team contributes to the promotion of sports and an improved image for Kawasaki City. For elementary schools in Kawasaki, the RedWave works to popularize sports and basketball. For example, the team holds a Friendship Classroom to provide basketball skill training as part of physical education classes. 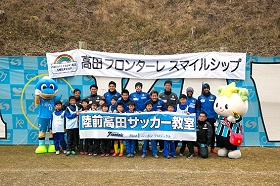 The Kawasaki Frontale soccer team has been taking action to be more community oriented. The Kawasaki Frontale soccer team set up the "Mind-1 Nippon Project" soon after the Great East Japan Earthquake in 2011, and has been continuously engaged in supporting med- to long-term recovery efforts in the affected areas. In September 2015, the team concluded the "Takata Frontale Smileship" friendship agreement with the city of Rikuzentakata, where it had engaged in support activities. The team will continue these activities, aiming to move from support aid to a relationship of mutually supporting smiles.