Fujitsu today announced that it is expanding its green IT initiative, Green Policy Innovation, globally, with the aim of achieving a cumulative reduction in worldwide CO2 emissions of more than 15 million tons over the four-year period from fiscal 2009 through fiscal 2012.

The global expansion of Green Policy Innovation will assist customers and society as a whole in reducing their environmental footprint, and mark a significant step in the realization of the Fujitsu Group's medium-term environmental vision, Green Policy 2020, to support the creation of a prosperous, low-carbon society.

International debate regarding the reduction of greenhouse gas emissions has been intensifying prior to the 15th United Nations Climate Change Conference (COP15). At the most recent Group of Eight Summit, world leaders agreed on a shared international goal of halving greenhouse gas emissions by 2050, and to achieve this goal it is estimated that emissions must be capped by 2020 at the latest. The rapid global adoption of energy-saving products and services and the introduction of other advanced environmental technologies in both developed and developing nations are seen as essential to meeting these goals. As a global IT company, Fujitsu believes it has an important role to play in reducing the environmental footprint of its energy-efficient IT equipment and datacenters as well as in introducing UK IT solutions throughout industry and society as a whole to reduce the burden of human activities on the environment.

In December 2007, Fujitsu launched its Green Policy Innovation program as a way to assist customers and society as a whole in reducing their environmental footprint. By developing energy-efficient IT and introducing green IT solutions throughout society, the Green Policy Innovation program initially aimed to reduce CO2 emissions by more than a cumulative 7 million tons in Japan over the fiscal 2007-2010 four-year period. In the first two years of the program through fiscal 2008, Fujitsu achieved a reduction of approximately 2.23 million tons of CO2.

In recent years, Fujitsu has accelerated its green IT initiatives in various regions outside Japan by combining the strengths of its worldwide operations and leveraging its technological expertise and environmental program experience. As part of this expansion, Fujitsu has created new global targets for the Green Policy Innovation program, aiming to reduce CO2 emissions worldwide by more than a cumulative 15 million tons over the fiscal 2009-2012 four-year period. The global expansion of the program will help customers around the world reduce their environmental footprint while serving as a pillar of the company's medium-term environmental vision, Green Policy 2020 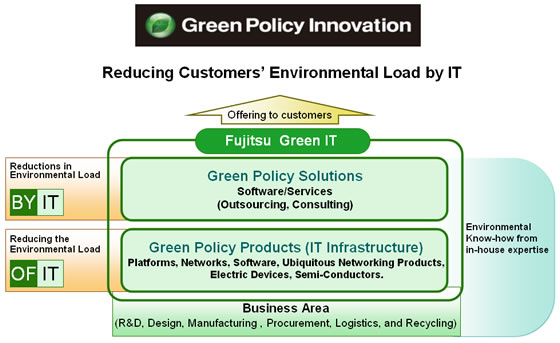 Fujitsu Group companies around the world have considerable expertise in developing and deploying green IT solutions. To meet the new global targets for Green Policy Innovation, Fujitsu is striving to reinforce this expertise and enhance the sharing of know-how among Group companies.

At Fujitsu, environmental sustainability is a long-term commitment dating back to 1993 when we established our first environmental program. Our mission is to create a prosperous, low-carbon future. Our vision is to achieve this through IT innovations that reduce society's environmental footprint and the impact of IT itself through the Green Policy Innovation program.

We are continually innovating with green IT services that help organizations reduce their carbon footprint through more sustainable practices and technology. Our power-saving, recyclable products are designed to lessen the environmental impact of IT on the planet. Our manufacturing plants, data centers and offices are being designed for low emissions, drawing on renewable energy and using natural landscaped surroundings. We complement these activities with the conservation of vast land tracts in Southeast Asia, carbon reduction programs and world-leading green governance. In 2006, Fujitsu completed global integration of its environmental management system based on ISO14001.

1 Tier III: Datacenters are evaluated based on their quality, including redundancy of ancillary equipment, etc., and assigned tiers Ⅰ-Ⅳ accordingly, with higher values representing higher quality.

Fujitsu is the leading Japanese information and communication technology (ICT) company offering a full range of technology products, solutions and services. Over 170,000 Fujitsu people support customers in more than 100 countries. We use our experience and the power of ICT to shape the future of society with our customers. Fujitsu Limited (TSE:6702) reported consolidated revenues of 4.5 trillion yen (US$54 billion) for the fiscal year ended March 31, 2012. For more information, please see: www.fujitsu.com

Fujitsu UK and Ireland is a leading IT systems, services and products company employing 11,400 people with an annual revenue of £1.7 billion. Its business is in enabling its customers to realise their objectives by exploiting information technology through its integrated product and service portfolio. This includes consulting, applications, systems integration, managed services and product for customers in the private and public sectors including retail, financial services, telecoms, government, defence and consumer sectors. For more information, please see: uk.fujitsu.com