Light can be produced and controlled electronically in several ways. In light emitting diodes or LEDs, a solid-state process called electroluminescence produces light. A relatively new phenomenon, LED lighting is making great strides in lighting industries with its power and efficiency. LEDs are envisaged to play a greater role with some types lasting up to 100,000 hours, compared to about 1000 hours for an incandescent bulb. Two key areas where LED technology is expected to impact lighting industries in the next decade include Illumination and Effects. 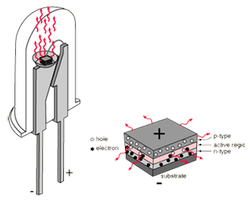 What Is A Light Emitting Diode [LED]?

The LED is a semiconductor device made from a combination of chemically polarised semiconductors. The chemical composition is selected to define the energy of the electrons that pass across the boundary between the two types of semiconductors. This energy is converted to light as electrons flow through the device. The electron defines the wavelength of the resultant coloured light. There are numerous benefits offered by LEDs especially in terms of their inherent efficiency and longer lifespan that translate into long-term savings.

Some of the significant benefits of LEDs are:

Essentially illumination uses white light and LEDs inherently are incapable of producing white light. However, LED technology has at least two ways of overcoming this limitation.

The first method pioneered by Nichia of Japan in 1996, involves the coating of a blue Led with phosphor. When the blue light hits the surface of the phosphor, it emits white light. This technology is commonly seen in commercial applications but the degradation of the phosphor coating over time places its estimated lifespan at about 6 years.

Alternatively, another method of producing white light by mixing the three primary colours red, green and blue is finding some applications. The drawback here however is that given the nature of additive mixing, the white tends to be inconsistent in its spectrum.