This product was made on the basis of the joint development between Tokyo Electron Device, Ishikawa Watanabe Lab and the University of Tokyo. 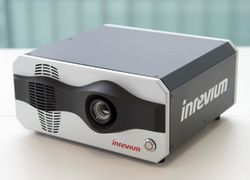 DynaFlash consists of FPGA boards, which control the LED for the brightness and the digital micromirror device (DMD) from Texas Instruments in order to reflect the correct light intensity to the screen/object with a very fast speed. One of the application areas for such a fast projector is dynamic image mapping, where each frame is generated relative to the position and the orientation of the object. This is achieved by a feedback loop through a high-speed camera and an image processing unit. The image shows the illustration of such a setup.

Although dynamic image mapping is a major application area, the features of DynaFlash can be used in other areas, such as industry, automotive and augmented reality.

In industrial applications DynaFlash can be placed in the production lines, where fast 3D measurement is essential. Here DynaFlash would project structured lights on the objects, which would be observed and used for 3D measurement with a camera system.

Smart headlights in automotive industry is another potential application area, where the ultra-high refresh rate and low latency of DynaFlash would be an advantage. Adaptive lighting can be projected with high precision and little delay on moving objects to increase the awareness of the driver in real time.

Another area where the low latency can be an advantage is the augmented reality applications, where the information from the user can be processed and projected in real-time. 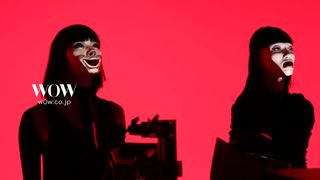 If you want to get more information on how the video is created, click here.