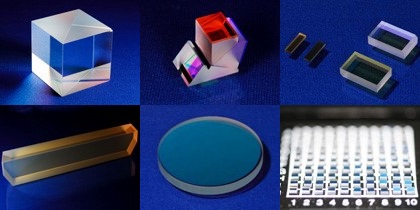 Corner Cube Prisms (CCP) are triangular prisms consisted of three right angles of 90 degrees. Reflected beam has a characteristic of inevitably returning in the direction of the incoming optical axis. The accuracy is shown with angular deviation (parallelism) between input and output beams. It depends on the mutual perpendicularity of the trihedral surfaces. Using this characteristic, they are often used in survey equipment. Processing from fused silica as well as optical glass is available upon your request.

Triangular Prisms are used for wide optical applications. Two triangular prisms are combined together to act as a beam splitter. They are also used for microscopes, survey equipment and measuring instruments.

We are specialized in the manufacturing of various different micro-prisms. All sorts of different micro-prisms are customized dedicated to your own purpose and application. Our X-Cube which consists of four pieces of right angle prisms, can be manufactured in the ultra-miniature size down to 2mm cube with almost seamless bonding and, PBS can be made down to 1.0mm cube. Much more complicated ones like TIR prism can also be made in millimeter order.

Porro Prisms are type of reflection prism used in optical instruments to alter the orientation of an image. These consist of a block of glass shaped as a right geometric prism with right-angled triangular end faces.

Roof Prisms are in general kind of reflective optical prisms containing a section where two faces meet at a 90 degree angle. Reflection from the two faces returns an image that is flipped laterally across the axis where the faces meet.

Rhomboid Prisms are used to displace a laser beam without changing its direction.

Rhomboid Prisms are used to displace a laser beam without changing its direction.

Beam Shaping Prisms are, in general, used as a beam shaper in laser diodes. The optical axis can be adjusted in a parallel direction by combining two of these prisms.

Wedge prism slightly tilts the angle of an incident beam and adjusts its efficiency. Wedge prism adjusts the aspect ratio of the semiconductor elliptical beam and focuses the beam efficiently.

Beam splitters are optical devices that split a beam of light in two. It is the crucial part of most interferometers.

Polarizing Beam Splitter (PBS) divides an incident beam into P and S polarizations. PBS has a function to divide a beam for recording and playing signals in optical pick-up units.

Non-polarizing Beam Splitters (NPBS) consist of a pair of precision high tolerance right-angle prisms cemented together with the coating on the hypotenuse of one of the prisms.

Non-adhesive wave plates are ideal for the usage with high power laser. No deterioration of the glue due to the irradiation of high energy density beam at the bonded surface. Excellent performance in both UV and IR bands.

These are polarizing prisms that comprise two crystals or calcites with double refraction and turn incident beam into linear polarized beam.

Rochon Prisms are used in applications where good polarization selectivity is required across a large range of wavelengths.

Bar Mirrors are used for the control system in the X-Y stage of lithography equipment. The performance of the X-Y stage determines the required accuracy for the bar mirror. High-precision Bar mirrors show excellent performance. NITTO OPTICAL provides bar mirrors in various sizes and wide selection of materials such as ceramics.
NITTO OPTICAL guarantees the surface flatness below λ using the ZYGO 32"(Φ800) Interferometer and the ZYGO 12" (Φ300) Interferometer

Size: from 100mm to over 3,500mm.
Surface Flatness from several μm level to λ or less.
Please contact us for details about specifications. (Materials, Shape, Surface Flatness, etc.)

The competitive advantage lies in their integrated production system with high-precision polishing and high-performance coating capabilities combined with their total quality assurance system. On top Nitto Optical is capable to deliver ultra-small to as well as large size optics and can scale their production from small lot size to large volume mass production.