Fujitsu has designed its new FP-2000 series of standalone thermal printers to further increase its growing share of this market. Smaller than its highly successful FP-1000 series, the FP-2000 series sets a new record for printing speed with up to 400mm/second making it ideal for busy environments. In addition, the power consumption is less than 0.9W compared to typically 3.5W, which reduces the running costs, as does the ability to use thinner paper of only 53micron instead of typically 65-85 micron, which reduces the paper costs by up to 10% and the maintenance as a roll lasts longer. 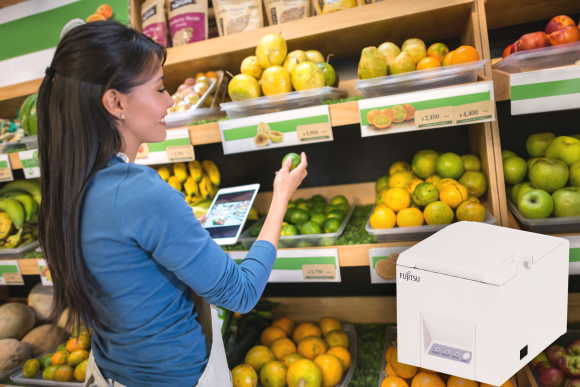 The FP-2000 series is the first in its class to offer greyscale printing. Until now, this would require a slow thermal printer costing three to four times more. Fujitsu’s specially developed algorithm analyses the picture and determines how to print it using 16 different intensities for each pixel, yet there is only a slow down in printing speed of around 20%.

“Having this innovative greyscale printing capability with no price penalty and hardly any speed reduction, opens up a wide range of new markets,” explained Christoph Hasekamp, Thermal Printer Marketing Manager at Fujitsu. “For example, coupons and offers can be printed with receipts at a checkout. Boarding passes can have a picture of the passenger for additional security. Temporary entry badges are more secure with a picture quickly printed on them. And in Gaming, where winnings are handled by issuing a coupon for redemption at a cashier to reduce the amount of cash being handled.”

Despite being a saturated market, Fujitsu has been achieving a 20 to 25% annual growth in market share by providing innovation over the market leaders whilst also being compatible with them through emulation so that software investments are protected and the look and feel of printouts remain the same to give customer continuity.

An example of a new feature that will increase market share is the provision of Bluetooth to address the growing market for mobile, Point Of Sale, Cloud solutions with tablets over fixed cash registers. Uniquely, the FP-2000 series is compatible with both IOS and non-IOS with a simple software setting giving flexibility for the future. Versions are available for RS232, wired LAN, wireless LAN and USB.

The global thermal printer market is over five million units a year and growing by 10% a year. It maintains its popularity because they are reliable and easy to use with no consumables, such as ink, toner or ribbon, apart from paper. Fujitsu’s FP-2000 family has three versions: the flagship Ultra High Speed FP-2200 that prints at up to 400mm/s, the mid- range, high speed FP-2100 and the entry level FP-2000.