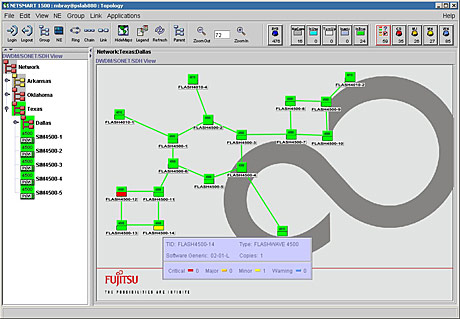 Until the 1990s people relied on device terminals to confirm transmission equipment performance. There was a need, however, for systems that could monitor and control entire networks from remote locations. The FLEXR, which Fujitsu developed in 1992, was the forerunner of such systems. The software ran on personal computers and workstations and allowed graphical network monitoring and control.
With the rapid expansion of the Internet in the late 1990s, the number of transmission systems under management also increased, and finding ways to manage these systems was becoming complicated. NetSmart client-server software was developed in 1998 to solve the problem. NetSmart continues to this day to support network stability and the management of telecommunication services.