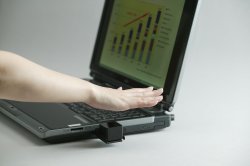 Currently exhibited at the CeBIT 2006 trade show held in the German city of Hannover from today till March 15, the PalmSecure™ is a more compact and efficient version of the award-winning Palm Vein authentication device launched for the ASEAN and India markets by
Fujitsu – the world’s third-largest IT services provider – last June.

Engineered using Fujitsu’s award-winning palm vein authentication technology, the PalmSecure™ emits near-infrared rays that are subsequently absorbed by deoxidised haemoglobin present in blood flowing through a user’s palm veins. This causes an image of the palm to be captured as a vein pattern, which is then verified against the user’s pre-registered pattern to grant (or deny) access to a physical location or computer network.

As veins are internal in the body and have a wealth of differentiating features, assuming a false identity through forgery is extremely difficult, thereby enabling an extremely high level of security.

The device captures a vein pattern only if haemoglobin is actively flowing through a user’s veins. Additionally, research by Fujitsu indicates that no two individuals – not even identical twins – have vein paterns that are exactly alike. These factors give the PalmSecure™ an edge over competing biometric identification products.

In addition, a user only needs to place his palm above the device – without having to touch it – for a vein patern to be captured. Thus, the PalmSecure™ is a contactless, hygienic solution suitable for deployment in locations or networks with high human traffic. Furthermore, palm vein authentication is not compromised by external factors such as bodily scars, skin abrasions and wounds.

The PalmSecure™ offers several improvements over its predecessor the Palm Vein, such as:

“Fujitsu’s palm vein authentication technology was commercialised in 2004 and has since been deployed by financial institutions, universities, libraries, government offices and private enterprises,“ said Mr Uno Motohiko, Head, Regional Marketing Group, Fujitsu Asia. “We are extremely proud to use this award-winning technology to develop the PalmSecure™ and position ourselves as a dominant player in the dynamic biometrics market.“

The PalmSecure™ will be available for the ASEAN (including Singapore, Malaysia, Thailand, Indonesia, Philippines and Vietnam) and India markets from end-June 2006. Visit http://sg.fujitsu.com or call 6512-7555 for more information.

Fujitsu Asia Pte Ltd was established in Singapore in 1997 to provide leadership in business development, technology innovation and customer support as regional headquarters for the Fujitsu group of companies in Asia outside of Japan. Building on Fujitsu's three decades of experience in Singapore and the broader Asian region and with a pool of highly skilled engineering talent, Fujitsu Asia is dedicated to providing comprehensive integrated IT, telecommunications and networking solutions that deliver tangible business value and enable customers to meet the challenges of the new global economy. Fujitsu Asia is a wholly owned subsidiary of Tokyo-based Fujitsu Limited (TSW: 6702), a leader in customer-centric IT and communications solutions for the global marketplace.
For more information, please see: http://www.fujitsu.com/sg/