Omron uses big data to help people find process improvements in the production of printed circuit boards. They have integrated log data produced from different points on their production line to visualize the end to end flow, enabling them to find problems and the root causes quickly and easily. As a result, their hourly productivity has improved by 30% in only a few months and the improvement in productivity still continues.

"The data surprised me when I first saw it. The solution revealed improvements I had been trying to find for a long time. It has given us reliable expectations to further improve our production line"

In search of global growth

Omron Corporation is an electronics manufacturer of automation and healthcare products. In July 2011, Omron developed 'Value Generation 2020', its long-term management vision through 2020, and continues to challenge itself for growth to become a global player. Focusing on quality, safety and the environment, Omron supports manufacturing innovation globally with its unique sensing and control technologies. In particular, its control equipment and factory automation (FA) systems business has the number one market share (40%) in Japan and operates in 80 countries around the world; Europe, North America, China and the Asia Pacific. Omron also provides manufacturing solutions to its customers, solving the diverse management problems at their production sites. At the same time, it has invested continuously to improve efficiency in the production lines of its own factories using Omron's controlling technologies and products.

The quest for the next level of continuous improvement in production

Omron has always sought to improve production processes in the main factory of its Industry Automation Business in Kusatsu city, Japan. The production line of the printed circuit boards consists of four steps. The first step is preparing the circuit boards with soldering. In the next two steps, different electronic components are attached to the boards. And in the final step all components are permanently fixed in place to the board. The log data from each device in the production line are stored in separate databases. Because the error logs from each machine are fragmented, identifying the root cause of a problem is difficult. Until recently, only experienced workers were able to check the error logs in the production and control systems to find the problems. And sometimes locating the root cause was beyond even these people, unable to see through the complex inter-relationships between different processes. Shinji Mizuno commented, "To realize the next level of continuous improvement, we need objective data."

The power of Big Data supports people for continuous improvement

Omron partnered with Microsoft and Fujitsu to do a Proof of Concept (PoC) of the real-time visualization of the production flow by linking each circuit board manufactured in the production with the different types of data recorded by each production system on the manufacturing line. The main goal of this PoC is to identify areas for improvement which cannot be easily identified even by experienced workers.

According to Mr. Mizuno, "There should be further room for improvement." The system is designed to use Big Data to support people who work daily in the production line.

In order to collect log data in real time from each device in the production line, Microsoft SQL Server and Omron's Sysmac NJ-series Machine Automation Controller, which controls movement of each device and machine, were used together. Since September 2013, Fujitsu has been developing a system which produces a 'Timeline Data Visualization' report by which the actual data can be analyzed at a glance by each circuit board or by the production process. It displays the production status in greater detail than ever before, yet is simple enough for anyone to understand. The report produces a detailed graph of the production flow chronologically, allowing workers to identify clearly when and where the productivity decreases and to overlay with other data to find the root cause of the inefficiency. 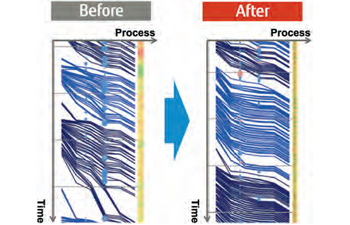 Even non-experienced workers are able to analyze the production status of each individual circuit board, leading to a six times gain in the efficiency of problem tracking and production improvement. For example, now one worker can analyze the root cause of the complex issues, which previously required six or more experienced people onsite to analyze, freeing more time to focus on engineering or process design. Within a few months, hourly productivity was up 30%, and still increasing. The new system also allows workers in different shifts to co-operate: workers can now view graphs of the production flow from the previous shifts and identify improvement points.

As the next step, Omron plans to map video data of the inspection process, combined with other data such as temperature, error log and quality data chronologically into one dashboard. This will be used by the manufacturing department as well as by the planning department for technology improvement and production and financial planning.

Omron and Fujitsu are considering promoting the jointly-developed system created at the production line in the Kusatsu Factory. One innovation in visualization leads to idea generation. This type of innovation chain is expected to be extended across enterprises and borders.

Information as of March 2015