No. 15 Highlights from VMworld 2019 US and Enhancements to Fujitsu Product (Operations Related)

“KOTONOHA” is a Japanese word that means “word”. It is an old term that was first used in waka (a form of Japanese poetry), and is currently used as a form of poetic wording.

It is finally almost time for VMworld

. This year’s VMworld US is being held at the Moscone Convention Center in San Francisco.
Although I received a blogger pass from the manager of the VMware Blog Program this year as well, I was told at the registration desk that I couldn’t register as a blogger if I had already registered as an alumnus, Therefore I sadly had to return my pass. Dedicated seats for bloggers are available for the keynote, and that would have been useful for me so it was unfortunate that I wasn’t able to access as a blogger. Since I would like to get the early bird discount, it would be nice if the blogger passes were distributed before the start of registration in the blog program for next year.

Introduction of the Highlights of VMworld US

image. The theme is about considering what kind of insights you can gain from VMworld and what you can accomplish. This theme makes me look forward to the event.
Now, I would like to pick up a few sessions that I am paying attention to as a vExpert.

In the keynote speech, VMware will talk about its track record up until now and announce its strategy for its direction going forward. The IT department consisting of server virtualization, software defined data centers vSAN (SDDC), and hybrid/multi-cloud services has expanded from the core data center market while the business department has expanded the target market to focus on IoT/Edge. Everyone is very curious about what their next move will be. My prediction is that they will make a full-fledged advance into AI and deep learning environments, and that such business will be positioned as pillar of their business strategy.
The reason for this is the acquisition of Bitfusion

.
I participated in the Breakout Session on Bitfusion’s Elastic GPU at VMworld last year. I introduced Elastic GPU in my blog from last year (No.13 Visit to VMworld from the Perspective of PPE and VMware vEXPERT (Japanese only)) , so please refer to this blog for more details.

Because there are over 700 sessions, it will be very difficult for everyone participating to decide which session to attend.
There are nearly 200 sessions related to the cloud, which of course is the most common topic. Of these sessions, a large number (over 100) are related to AWS.
vSANS and HCI are also not to be outdone. There are around 170 sessions for both, and there will be no way to attend all of these sessions. There are also over 100 sessions on NSX. What we can know from this is that the elements forming hybrid clouds account for the majority of sessions, which is interesting because it deeply reflects the direction of VMware’s strategy. Container and Kubernetes are topics that give a bit of prediction on the future of infrastructure. There are nearly 40 sessions for each of these topics. I recognize this as meaning that advances have been made in the use of AI and deep learning environments and that these are fields that we should watch.
This year I was on standby until 1 in the morning on July 17 when the schedule was released and I spent 2 hours making a schedule with a focus on vSAN while also incorporating AI and deep learning. For vSAN, I selected sessions including those on Deep Dive explaining technical details, performance, troubleshooting, and Stretched Cluster for which there are examples of use by our customers (Japanese only) . For hardware related topics, I made reservations for sessions on NVMe, NVDIMM, ARM, AI, deep learning, and of course on Bitfusion. As a result of me going a bit overboard in my selection of sessions, my schedule is so full that I only have about 30 minutes for lunch break, and because I also have no time to look at the exhibition, I'm planning to take a close look at my schedule again and make some time.

[Reference] Sessions that I reserved

In addition to the sessions listed, there are also many interesting sessions on VMTN. There are plenty of things to do, including hackathons, corporate exhibition, the VMware Village that is a rest area, and networking party at night. When I was eating lunch at Yerba Buena Park next to the convention center when VMworld was held in San Francisco, I received a comfortable leisure sheet from VMware. The event is worth checking for people who are interested in VMware goods. However, I don’t know whether they will be giving out these goods this year.

There are two notices this time.

We offer FUJITSU Plug-In for Veeam Backup & Replication that enables direct backups of ETERNUS storage snapshots from Veeam. This allows high-speed backup to be controlled from Veeam with the storage function that does not result in a load for the server. It also supports secondary backup to the tape library ETERNUS LT series and ETERNUS CS800, and allows further backup integration with the cloud from ETERNUS CS800.

This backup solution will be exhibited at the Fujitsu booth#543 during VMworld US.

Something you shouldn’t forget is that because Veeam also supports VMware vSAN, it can be used as backup for Fujitsu’s HCI PRIMEFLEX for VMware vSAN. We hope that you consider using it.

ISM for PRIMEFLEX that is also equipped with the management functions of VMware vSAN is standardly equipped in the Infrastructure Manager (below, “ISM”) for operations of PRIMEFLEX for VMware vSAN, so there is no need for separate arrangements. Because ISM supports REST API, it is possible to acquire and display ISM management information from the dashboard of the operations tool you use. The features are described in No.12 Take a Good Look at Fujitsu’s HCI -FUJITSU Integrated System PRIMEFLEX for VMware vSAN! (Japanese only)」, so please refer to it for more details.
I will provide some information on ISM enhancements at this time.
ISM can achieve integration with not only servers, but also storage devices. At this time, in addition to FUJITSU Storage ETERNUS, integration has also been strengthened with the ETERNUS NR1000 series that has a track record of over 20 years as the first OEM in Japan for NetApp FAS.
The recent storage feature on Fujitsu's web site has an introduction on how the ETERNUS NR1000 series became even easier to use by integration with ISM.

Specifically, the System Manager management GUI for ETERNUS NR1000 can be operated through integration with the ISM GUI.
For example, if you are introducing a VDI environment in the user profile area with PRIMEFLEX for VMware vSAN and the NR1000 series, central management of NR1000 from the ISM included with PRIMEFLEX is possible.

In addition, for virtual network issue that require specialized skills to resolve in ISM, “troubleshooting” in which the virtual network packet is analyzed and improvement measures are proposed has been automated. Original technologies developed by Fujitsu Laboratories Inc. are used in this function. 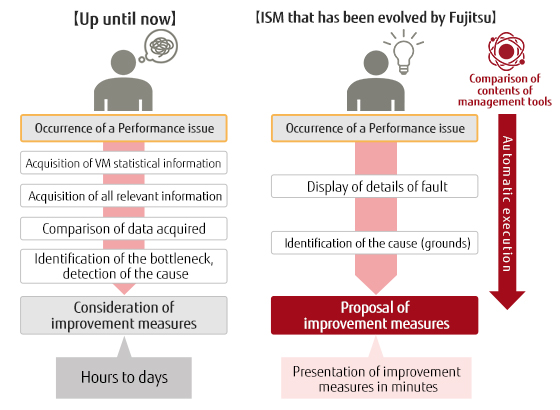 In this manner, ISM has been rapidly enhanced with functions that improve the efficiency of operations monitoring for customers. The department where I belong to will conduct assessments and verification and provide feedback on the ease of using these functions from the users’ perspective, and you can count on us to strengthen ISM user quality and functions.

Because ISM is not only for HCI but also sold as software, we hope that you also consider using it as well as FUJITSU Server PRIMERGY and FUJITSU Storage ETERNUS for the operation management of the environment you use.

Next time, I will release an article detailing my visit to VMworld in September.
I will give you my raw feedback on what I saw at VMworld from the perspective of a vExpert. I hope that you read it.