The optimal solution to eliminate batteries for SRAM in industrial machinery

Yokohama, Japan, June 26, 2018 – Fujitsu Semiconductor Limited today announced that it has developed the MB85R8M2T, an 8Mbit FRAM* that has the largest density in Fujitsu's family of FRAM non-volatile memories. Mass-produced products are currently available.

This product features a wide power-supply voltage range from 1.8V to 3.6V and an SRAM-compatible parallel interface. The MB85R8M2T is the most appropriate memory that fits the requirements of customers who are developing industrial machinery and want to use something with larger density than the current 4Mbit FRAM, or to eliminate the need of a battery for an SRAM whose usage pertains to the backup of data during a power outage.

By replacing the SRAM device with this new FRAM product through various industrial applications, such as in control units in facilities and robots, it can eliminate the need for a backup battery and can save approximately 90% of the mounting area for memory parts. It contributes towards reducing battery-related costs.

For approximately 20 years, Fujitsu Semiconductor has mass-produced FRAM non-volatile memory products featuring high read/write endurance, high-speed write operation, and low power consumption. In particular, the guaranteed read/write cycles of their FRAM product are 10 trillion cycles, which is 10 million times that of the non-volatile memory EEPROM offered by their competitors. For this reason, Fujitsu FRAM products have been adopted for industrial applications requiring frequent data re-writing such as real-time data logging and 3D positioning data logging. 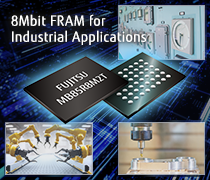 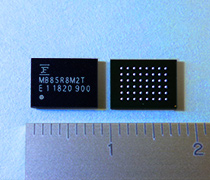 Today, Fujitsu Semiconductor has launched a new 8Mbit FRAM product, MB85R8M2T, that operates with a wide power-supply voltage range from 1.8V to 3.6V through an SRAM-compatible parallel interface.

The FRAM product is available in a 48-pin FBGA package with very small dimensions of 8.00 x 6.00 mm, developed according to customer requirements. If a customer is using SRAM in a 44pin TSOP package together with a data-backup battery in their application, by replacing it with FRAM, approximately 90% of their mounted surface area can be saved due to eliminating the need for a battery. (Fig.1)

In addition, replacing the SRAM with FRAM is effective in reducing total battery-related costs. Eliminating the data-backup battery not only reduces the cost of a component, it also eliminates the periodical costs associated with replacement batteries, battery stock, and other maintenance, reducing total costs in terms of both development and operation. This batteryless solution can, therefore, contribute greatly towards reducing the above mentioned total costs. (Fig.2)

Fujitsu Semiconductor continues to provide our customers with memory products and solutions that contribute to increased performance and reduced total costs in customer end-products.

* FRAM:
Ferroelectric random-access memory. A type of memory that uses a ferroelectric file as capacitors that store data. Retains contents even when power is removed. Combines benefits of both ROM and RAM, with fast write speed, low-power consumption, and high read/write cycle endurance. Also known as FeRAM. Produced by Fujitsu Semiconductor since 1999.

About Fujitsu Semiconductor
Fujitsu Semiconductor Group includes a system memory group that is focused on high quality, high performance Ferroelectric random access memory (FRAM), wafer foundry group that has excellent technology and support, and the sales business of Fujitsu Electronics and overseas sales companies. Headquartered in Yokohama, we established as a subsidiary of Fujitsu Limited on March 21, 2008. Through its global sales and development network, with sites in Japan and throughout Asia, Europe, and the Americas, we offer semiconductor solutions to the global marketplace.
For more information, please see : http://www.fujitsu.com/jp/fsl/en/