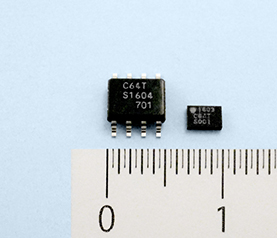 Now, in response to the market demand for lower power consumption, Fujitsu Semiconductor has developed the MB85RC64T, 64Kbit FRAM that offers the lowest class of operating current among Fujitsu’s FRAM product line (Figure 1). 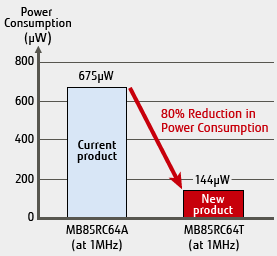 This product with I2C interface operates with a wide range of power supply voltage, from 1.8V to 3.6V, at up to 3.4MHz and offers as major features extremely low average current when operating (170 μA at 3.4 MHz, 80 μA at 1 MHz). It offers an approximately 80% reduction in operating power consumption compared with Fujitsu Semiconductor’s existing products (Figure 2), achieving the lowest industry class of operating power consumption for 64Kbit FRAM. 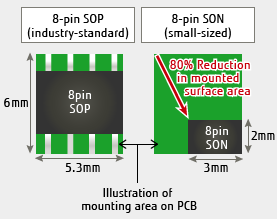 Fujitsu Semiconductor offers this product in an industry-standard 8-pin SOP, and also in a small-sized 8-pin SON. The mounting area for the SON is about 20% that of the SOP (Figure 3), and the mounting volume is 8% that of the SOP, making it optimal for applications requiring miniaturization.

The MB85RC64T, featuring low power consumption in a small package, is expected to be used as memory in such devices as battery-operated wearables and measurement devices, smart meters, and gas and water meters.

Fujitsu Semiconductor will continue to provide products and solutions to improve the values and convenience of customers’ applications.