Yokohama, Japan, February 18, 2016  - Fujitsu Semiconductor Limited today announced the development of MB85RQ4ML, its new FRAM (*) product with 4 Mbit of memory, which represents the highest density in the non-volatile RAM market with a quad SPI interface. The new product is available in sample quantities starting today. 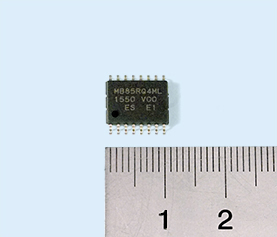 This product operates with a 1.8V single power supply, using a quad SPI interface with four I/O pins, and can achieve data transfer rate of 54 MByte per second.

Its high-speed operation and non-volatile memory make it ideal for use in the networking, RAID controller, and industrial computing fields.

In response to rising demand for faster speed in non-volatile RAM interfaces, Fujitsu Semiconductor has now developed the MB85RQ4ML 4Mbit FRAM, which has the highest data transfer rate in its FRAM product line (figure 1). 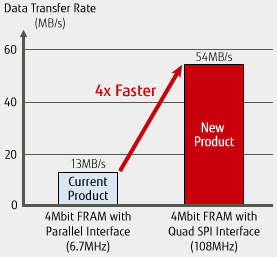 This product is an ideal for network equipment, such as routers, where setting data values is continually rewritten. It is positioned half-way between high-density non-volatile memory for data storage and high-speed working memory, and supports data rewriting with high-speed access and data back-ups (figure 3). 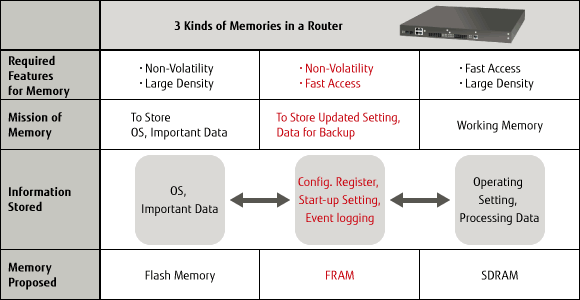 Figure 3： Use case of Memories in Network Devices

In the IoT market, which handles with big data, data processing volumes are increasing, and there is a need for frequent data rewriting in memory. In addition, from a security perspective, greater importance is being placed on preserving access records. Considering this background, as the memory that preserves access information in the networking field, this product contributes to improving equipment performances.

Fujitsu Semiconductor will continue to provide products and solutions to increase the value and convenience of customer applications.

* FRAM:
Ferroelectric random-access memory. A type of memory that uses a ferroelectric file as capacitors that store data. Retains contents even when power is removed. Combines benefits of both ROM and RAM, with fast write speed, low-power consumption, and high read/write cycle endurance. Also known as FeRAM. Produced by Fujitsu Semiconductor since 1999.

Fujitsu Semiconductor Group includes a system memory group that is focused on high quality, high performance Ferroelectric random access memory (FRAM), wafer foundry group that has excellent technology and support, and the sales business of Fujitsu Electronics and overseas sales companies. Headquartered in Yokohama, we established as a subsidiary of Fujitsu Limited on March 21, 2008. Through its global sales and development network, with sites in Japan and throughout Asia, Europe, and the Americas, we offer semiconductor solutions to the global marketplace.
For more information, please see: : http://www.fujitsu.com/jp/fsl/en/