Yokohama, Japan, February 17, 2014 — Employees of Fujitsu Semiconductor limited have received the 60th "Okochi Memorial Technology Prize" for their work on "Development of the Volume Production Technology for High Density Ferroelectric Random Access Memory". The award ceremony will be held on Wednesday, March 26 in Tokyo.

The Okochi Prizes were established in honor of Dr. Masatoshi Okochi, who was the third president of the Institute of Physical and Chemical Research (known as RIKEN) and made great contributions to both the academic and the industrial communities in Japan. The prizes are awarded every year to individuals or groups for their noteworthy achievements on industrial engineering or manufacturing technologies.

Outline of the awarded work

Smart cards and mobile devices, which have gained popularity since the 1990's, have been requiring memories that store the data even when the power is switched off (non-volatility), operate at low power in high speed, and have high write-erase cycle endurance. Ferroelectric Random Access Memory, or FRAM, meets these requirements, but the efforts for the technology developments, in both Japan and the United States, to manufacture the memory using the conventional semiconductor process had not been necessarily successful. Oxide ferroelectric material used in the FRAMs is reduced by hydrogen gas generated during the conventional semiconductor process, and the reaction causes the degradation of the ferroelectricity. Fujitsu Semiconductor developed the technology that could prevent the ferroelectricity degradation, and made the volume production of FRAMs possible. It also developed the read-write circuits optimized for the characteristics of the ferroelectric capacitors, enabling the high memory density and low voltage operation. Today, leveraging the superior characteristics in write-erase cycle endurance, write speed, and power consumption, FRAMs are utilized in many applications such as smart cards, authentication devices, electronic tags and others.

Fujitsu Semiconductor Limited designs and manufactures semiconductors, providing highly reliable, optimal solutions and support to meet the varying needs of its customers. Products and services include Customized SoCs (ASICs), Foundry Service, ASSPs, and Ferroelectric RAMs (FRAMs), with wide-ranging expertise focusing on mobile, imaging, automotive and high performance applications. Fujitsu Semiconductor also drives power efficiency and environmental initiatives. Headquartered in Yokohama, it was established as a subsidiary of Fujitsu Limited on March 21, 2008. Through its global sales and development network, with sites in Japan and throughout Asia, Europe, and the Americas, Fujitsu Semiconductor offers semiconductor solutions to the global marketplace.
For more information, please see: : http://www.fujitsu.com/jp/fsl/en/ 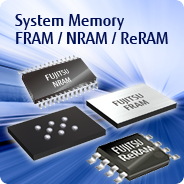