In my opinion piece entitled “Thoughts on China’s New Silk Road Strategy” (published in Japanese on FRI’s website on April 21, 2015), I performed a deep analysis of China’s new Silk Road strategy. Ironically, the rest of the world is more focused on discussing the Asian Infrastructure Investment Bank (AIIB), a policy tool being used to support this strategy. China’s true motives in guiding the establishment of the bank can be read in myriad ways, including: challenging the international financial powers that be; securing geopolitical power; securing its own economic advantage; or establishing a new facility for moderating between countries with capital and those without.

Upon examination of the economic relationships between China and the rest of the world and the various information being transmitted from within its borders, China’s true intentions are to use the AIIB, an international development institution, to secure the multilateral credit heft of such a bank which it would not have under its own economic power alone and to “harmoniously assert its political and diplomatic influence.” (China also hopes to remove the “Chinese Threat” from other countries’ minds by providing economic profits to its partners through multiple channels.)

As Figure 1 shows, China is promoting the establishment of two main policy tools to support the funding of its new silk road strategy in the region (Xinhua: Accelerated Establishment of the Silk Road Economic Belt and 21st Century Maritime Silk Road). One of these tools is the Silk Road Infrastructure Fund (SRIF), which China funded alone for $40 billion. Concerning the SRIF, People’s Bank of China Governor and SRIF Manager Zhou Xiaochuan, said:

“The SRIF is like a Private Equity (PE), but investment periods are longer than those of normal PEs. We are not publicly seeking funds, but internal and external investors can fund the SRIF with a commercial base. Because there are no balancing factors as in a multilateral developmental bank, such as different cover rates and political considerations according to country, it is relatively more simple and flexible in terms of structure and policy decisions. After its establishment, it will be operated on a commercial base and subfunds are also likely to be established.”(*1)

In other words, the SRIF is essentially a for-profit investment fund, and a convenient tool for China to use as it pleases.

The second policy tool China intends to wield is the AIIB, a regional developmental institution established cooperatively by many national governments. Lou Jiwei, the Minister of the Department of Finance, which is the governing agency of the AIIB, announced at the APEC Finance Ministers’ Meeting in October 2014: “The AIIB is semi-commercial, and at first it will provide sovereign loans to sovereign countries for infrastructure projects. In the future, projects for which a trust fund cannot be established and sovereign collateral cannot be provided, the bank will undertake public-private partnerships (PPP) such as sovereign wealth funds (SWF), pension funds, and private sector funding, in order to invest in infrastructure projects in developing Asian countries.”(*2) In other words, China imagines the AIIB’s investment area to fall somewhere between pure commercial investment and strongly non-profit development finance (e.g., World Bank, ADB), and it aims to be profitable to a certain extent. 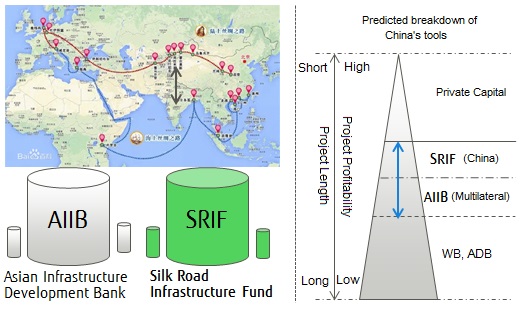 Source: created by the author

In order to accomplish this goal of “semi-commercialization”, China is emphasizing that the AIIB will provide mainly funding for transportation, communication, and industry infrastructure unlike the World Bank and ADB, which are concerned mainly with the eradication of poverty. This is rather a fresh idea for a developmental financial institution which seems to borrow from the recently devised concept of Inclusive Business; one might even call it IB in the infrastructure sector.

One might ask why China, after creating a useful tool like the SRIF, has to go forward with such a fussy and controversial thing as the AIIB in the first place. The answer is probably that China’s true motive for leading the establishment of the AIIB is that it expects many countries, including the US, to join, thereby allowing it to secure multilateral credit functionality which it would not have had on its own. In other words, China judged that the benefits of the multilateral approach would likely exceed the costs.

There are two main factors underlying this:

The regions in which the AIIB is expected to invest cover a wide swath of emerging and developing countries in Southeast, South, and Central Asia and northern Africa. Many of these countries are politically unstable and have problems with their national credit (lower ratings) and their legal systems and enforcement. In the past, China has had many cases where it suffered significant losses due to administration changes, labor disputes, tax policies, and social and environmental movements forcing it to abandon its projects.

China has been consistent in its principle of avoiding unilateral action, but it has also come to the painful realization of the limits of bilateralism, i.e., it has no means of enforcing its contracts with these countries. Therefore, it is fair to assume that China wants to solve the problems of contract enforcement and credit management, which it couldn’t solve on its own, by turning to the multilateral strength of the AIIB (more stakeholders means a larger confluence of power). In that sense, China and Japan share the same concerns about credit management at the AIIB, and their discussions seem to be heading in the same direction.

To date, more than 20,000 Chinese companies have invested abroad, but more than 90% of them have failed to turn a profit.(*3) Early on, most of these investments were for the purpose of obtaining resources, and calculating investment returns was difficult. Now that investments have shifted toward capturing foreign markets, however, there is more interest in investment returns. In particular, the issue of fund costs arises when funds are procured from the capital market. In order to realize the One Belt, One Road strategy, the Chinese government cannot provide all funds, but some must be procured from the market as well. This strategy is expected to be aimed at infrastructure projects in emerging and developing Asian countries, but high return rates are not expected, meaning that constraining capital costs will be a matter of survival for lending institutions. China likely aims to establish the AIIB in order to use its multilateral nature to increase its rating and reduce capital procurement costs.

Currently, China’s state-owned financial institutions, the China Development Bank and the Export-Import Bank of China, have long-term debt ratings (S&P) of AA-, while the World Bank and ADB have AAA ratings. A simple comparison of past cases shows that when issuing bonds on the market in order to procure financial capital China’s state-owned banks have procurement costs (payment interest) 0.45-0.625% (5 year period; USD) or 1.35% higher than the WB or ADB.(*4) In contrast, widely supported international financial institutions like the ADB enjoy the reinforcing effect of multilateral credit, and as a result their ratings can often be higher than those of their main funders (e.g., Japan’s S&P sovereign rating is AA-). For this reason China is pushing strongly to obtain AAA rating for the AIIB. China’s effort to bring in more participants, including Japan and the US, is partly underpinned by this purely economic calculation.

While gathering such an array of developed countries as England, Germany, and Australia to join in the AIIB and thereby help boost its rating, there are many more important factors which will contribute to the rating: AIIB self-capital ratio, liquidity, management, yieldability, and risk management ability. Therefore, issues of concern to the US and Japan such as AIIB’s governance structure, debt management, and sustainability are also matters of interest for China. China’s efforts are aligned with the concerns of Japan and the US.

4. Wielding Influence without the “China Threat”

Despite the ability to interpret the AIIB from an economically practical point-of-view, many political and diplomatic analyses in other countries interpret the bank as a challenge to the existing international financial system or an attempt to expand regional clout.(*5) If one assumes such geopolitical motives on China’s part, however, the independent establishment of the SRIF, which facility would allow China to achieve such goals, makes it difficult to understand why it would require the multilateral AIIB. An example of such a move was the US’s Marshall Plan, an independent gambit meant to revitalize the European economy while simultaneously grabbing geopolitical power.

The following interpretation by Brookings Institution fellow Erica Downs is a rather more pragmatic one: “China’s expanding footprint in Asia might be perceived as less threatening to other countries if projects involving Chinese firms are funded by the AIIB instead of” buy mechanisms (financing) such as the China Development Bank or the Export-Import Bank of China. “China could use AIIB to legitimize its economic expansion.”(*6) Rather than using political and diplomatic influence for an all-out attack on the existing international financial system, China is trying to globalize its economy using the soft power of offering multichannel economic profits and thereby spread its collaborative influence even farther.

The recent explosion in Chinese capital and products has elicited much criticism from emerging and developing countries in Asia and Africa about the “Chinese Threat” and China’s “New Colonialism.” Similar to the way in which China has been swapping economic profit for strategic advantage (i.e., providing economic benefits to its partners in order to ameliorate the “Chinese Threat” stigma) through bilateral FTAs,(*7) the AIIB can be seen as such a multilateral swap.

5. China’s Answers to US and Japan Concerns

Looking at China’s unilateral capital investment activity in African and other developing regions—financing without concern for the environment or the weak members of society; suspicion of bribery to secure projects; and procurement for Chinese companies only—Japan and the US are very worried about a China-led AIIB.(*8) These concerns about the bank can be summed up as follows: China’s funding share is very high; there is no standing board of directors, among other organization governance issues; financing conditions are lax; and financing policy and conditions are lacking in environmental and societal sensitivity and corruption countermeasures.

In response to these concerns, presidential candidate and director of AIIB preparations, Liqun Jin, addressed the China Development Forum 2015 following this year’s National People’s Congress as follows: “China does not intend to provide the majority of the bank’s funding, and as more countries join, China’s funding share will naturally decrease. Furthermore, the AIIB’s core principles are smart, pure, and green, with zero tolerance for corruption. We will create an open, transparent, and inclusive international bank.”(*9) Ministry of Foreign Affairs spokesperson, Hong Lei, in response to questions regarding the AIIB’s transparency and governance issues, emphasized that “The AIIB will have governance structures and operation policies designed based on the principles of openness, inclusiveness, transparency, responsibility, and fairness, and it will avail itself of the benefits gleaned from the experiences of existing international developmental institutions. Further, in order to avoid the missteps and pitfalls of the existing systems, it will endeavor to reduce costs and increase operational efficiency.”(*10) Whether the AIIB system design and operations actually turn out as promised can only be confirmed by officially establishing the bank and putting it through its paces. In either case, China deserves credit for trying to assuage the concerns of potential AIIB members, Japan and the US. China seems to want to meet the demands and expectations of these countries that the AIIB have robust governance structure and fair organizational operations.

It is likely that Australia and other developed countries decided to join the AIIB because they were impressed by China’s efforts to address other countries’ concerns. These countries are doing their best to secure the health of the bank from the inside, even as Japan and the US are monitoring it from the outside. Such an external board member-like role may be effective in keeping the bank healthy. All that remains is for China to make the AIIB a success and show Japan, the US, and others that their concerns were unnecessary.