Kawasaki, Japan, March 15, 2017 - Fujitsu Optical Components Limited (FOC) announced today that it has released a 64 Gbaud LN modulator (compliant with OIF ( *1 ) HB PMQ) and a 64 Gbaud integrated coherent receiver (compliant with OIF HB Micro-ICR Class 40) for use in single carrier 600 Gbps coherent transmission applications. FOC has previously led the market by being the first in the world to launch leading-edge optical products such as 100G/200G coherent transceivers, 100G/200G LN modulators, and 100G/200G integrated coherent receivers. FOC will now once again be offering leading edge optical device solutions into the coherent transmission market with its launch of products designed for single carrier 600 Gbps coherent transmission systems. These products will help facilitate high-capacity network equipment for use in data center interconnect and metro networks. 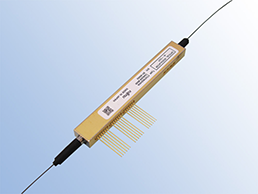 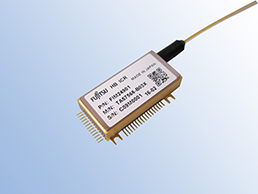 Internet services such as cloud computing have led to a rapid increase in the volume of communications traffic. The arrival of the IoT (Internet of Things) age will further accelerate the volume of communications traffic in the future. This has led to the spread of 100G optical networks and increased demand for next-generation beyond 400G optical networks. Current mainstream 100G/200G coherent transmission systems use a 32 Gbaud DP-QPSK ( *2 ) /16QAM ( *3 ) modulation format and a single carrier. There are three methods that can further expand that transmission capacity: 1) increase the symbol rate, 2) use higher order modulation formats, 3) increase of the number of optical carriers. FOC has now successfully commercialized a 64 Gbaud LN modulator and a 64 Gbaud integrated coherent receiver with the capability of supporting higher order modulation formats up to 64 QAM.

The FOC 64 Gbaud integrated coherent receiver is compliant with the OIF HB Micro-ICR Class 40 requirement for receivers in next-generation 600 Gbps optical networks. The receiver size has been able to be maintained the same as that of the current conventional integrated receivers by utilizing PLC technology to achieve very small sized 90° Hybrids. Its wideband photodiodes and high receiver sensitivity provide it with the capability to receive the 64 Gbaud DP-64 QAM transmissions used in next generation 600 Gbps networks.

FOC plans to demonstrate this product in our booth (#1701) at OFC 2017 which is scheduled to take place from March 21 to 23 in Los Angeles, California, USA.