Kawasaki, Japan, March 14, 2017 - Fujitsu Optical Components Limited (FOC) announced today that a live demonstration of its high bandwidth CFP2 ACO transceiver for single-carrier 600G coherent transmission will take place in FOC’s booth #1701 at OFC 2017 in Los Angeles, California, USA on March 21-23, 2017. This product is designed to support symbol rates up to 64 Gbaud which is twice the rate of conventional CFP2 ACO transceivers. Its single-carrier coherent transmission of 600 Gbps is achieved by using an internal 64 Gbaud LN modulator, 64 Gbaud integrated coherent receiver, and 64 QAM (*1) modulation format.
This product will help facilitate high-capacity optical network equipment for use in data center interconnect and metro networks. 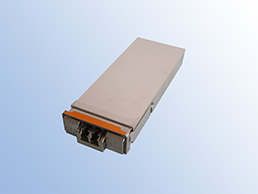 Internet services such as cloud computing have led to a rapid increase in the volume of communications traffic. The arrival of the IoT (Internet of Things) age will further accelerate the volume of communications traffic in the future. This has led to the spread of 100G optical networks and increased demand for next-generation beyond 400G optical networks. Current mainstream 100G/200G coherent transmission systems use a 32 Gbaud DP-QPSK (*2) /16QAM modulation format and a single carrier. There are three methods that can further expand that transmission capacity: 1) increase the symbol rate, 2) use higher order modulation formats, 3) increase of the number of optical carriers. By using an internal 64 Gbaud LN modulator and 64 Gbaud integrated coherent receiver with the capability to transmit higher order modulation formats up to 64 QAM, FOC has succeeded in developing a high bandwidth CFP2 ACO transceiver which can achieve 600 Gbps coherent transmission over a single optical wavelength.