Kawasaki, Japan, August 11, 2009 - Fujitsu Optical Components Limited today announced the development of the world's most energy-efficient (maximum 0.7W), compact Integrated DPSK (*1)Receiver with a delay line interferometer (*2)and a balanced receiver (*3). The product is designed for use in 40Gbps transponders (*4)for 40Gbps optical networks, which are being widely adopted by telecommunications carriers worldwide. Sales of the receiver will begin October 1st, 2009. The compact receiver will improve the energy-efficiency of 40Gbps transponders, thereby making it possible to manufacture environmental-friendly optical transmission equipment for 40Gbps optical networks. 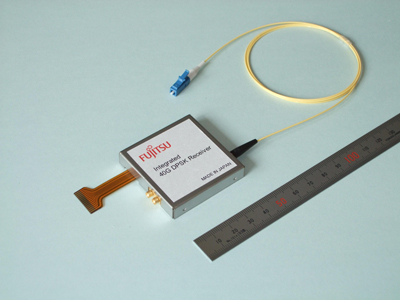 In recent years, the global expansion of new services such as cloud computing and on-line streaming has brought about a dramatic increase in data communications. As the data transmission volume of communications networks rises, optical transmission equipment for 40Gbps backbone networks is being widely introduced. However, due to advances in transmission speed, the components that constitute these optical transmission equipment are growing both in size and complexity. Larger equipment results in the need for larger installation space and higher power consumption. Meeting the demands of growing data communications while reducing environmental impact at the same time has become a major challenge for 40Gbps systems.

Until recently, generating digital signals of 1 and 0 by turning a light on and off had been the common method of intensity modulation for optical networks. However, responding to the growing needs for ultra-high-speed and long-distance transmission, phase modulation has become the mainstream modulation method for 40Gbps optical networks. Phase modulation generates digital signals of 1 and 0 by changing the phase of light while allowing it to be in the on position. Phase modulation has superior bandwidth efficiency and is not easily affected by signal distortions caused by transmission fibers and relay nodes. However, it increases the size and complexity of 40Gbps transponders and circuit configurations. The challenge is to minimize the size and power consumption of 40Gbps transponders.

Fujitsu Optical Components has succeeded in commercializing a compact Integrated 40Gbps DPSK Receiver with the world's lowest power consumption. This receiver is used for 40Gbps optical transponders capable of handling DPSK - a primary format of phase modulation - allowing the transponders to become more compact and energy-efficient.

In the future, Fujitsu Optical Components plans on commercializing compact and energy-efficient integrated receivers for other phase modulation formats, such as DQPSK (*5)and DP-QPSK (*6).

1. Integration of Delay Line Interferometer and Balanced Receiver
The delay line interferometer and balanced receiver had previously been individually packaged and used in connecting two optical fibers. The length of these optical fibers had to be approximately ± 0.2mm in order to reduce the time delay of the optical signals. As a result, they were joined by an optical connector as opposed to a splice. As mounting spaces to install the optical connector and optical fibers were necessary, the area used within the transponder had become constrained.

Now, the packaging for the delay line interferometer and balanced receiver has been designed to provide highly reliable sealability and compactness for mounting purposes. In addition, this optimal design encompassing optical fiber rooting enables the integration of all functions. The optical fiber rooting for connection is unnecessary.

However, with the new optimal design of parts including the thermal control component and optical devices, Fujitsu Optical Components has now achieved the lowest power consumption of maximum 0.7W to thermally control the optical component for phase adjustment of the delay line interferometer. The power consumption is approximately 1/4 that of the conventional type.

(*1) DPSK
Acronym for Differential Phase Shift Keying. It is a method of phase modulation for digital signals, in which 1 bit of data is allocated to each of 2 modulated optical phases (0° and 180°).

(*2) Delay Line Interferometer
A component that converts phase modulation to intensity modulation. In the case of DPSK, the light modulated on phase is divided in two optical paths with half strength, and after one side is delayed for the time corresponding to about one bit, these two lights are combined to one light and interfered.

(*3) Balanced Receiver
Consisting of two photodiodes that receive both positive optical phase and reverse optical phase output from delay line interferometers, it improves receiving characteristics by using the difference of those photodiode currents.

(*5) DQPSK
Acronym for Differential Quadrature Phase Shift Keying. It is a method of phase modulation for digital signals, in which 2 bits of data are allocated to each of 4 modulated optical phases (0°, 90°, 180° and 270°).

(*6) DP-QPSK
Acronym for Dual Polarization-Quadrature Phase Shift Keying. It is a method of phase modulation for digital signals, in which 2 bits of data are allocated to each of 4 modulated optical phases (0°, 90°, 180° and 270°) for both P-polarized light and S-polarized light.

Aiming to strengthen Fujitsu's optical module business, Fujitsu Optical Components was established on April 1st, 2009 as a wholly owned subsidiary of Fujitsu Limited. With the establishment of the new company, the sales, research and development, and manufacturing functions of Fujitsu's optical module business are integrated under a unified management structure. Headquartered in Kawasaki, Japan, Fujitsu Optical Components is a leading supplier of the most advanced, high-reliable and customer-focused optical components for datacom and telecommunications applications in the global market. Its broad products line-up includes DWDM pluggable transceivers, full-band tunable 300pin transponders, G-PON transceivers and 40G/100G LN modulators. The company also plans to provide the most advanced 40G/100G integrated receivers in the near future. For additional information, visit http://www.fujitsu.com/jp/foc/en/.