Labor shortages are one of the greatest concerns for distribution warehouses in the manufacturing industry. Other issues faced by the industry include how to improve task efficiency and maintain worker safety. To resolve these challenges, the focus is now turning toward the Internet of Things (IoT). It is hoped that by leveraging IoT to visualize previously poorly understood worker movements, and combining that information with other business data, clues can be uncovered that lead to improvements. This article looks at examples of the successful use of IoT to visualize warehouse operations and improve work practices. 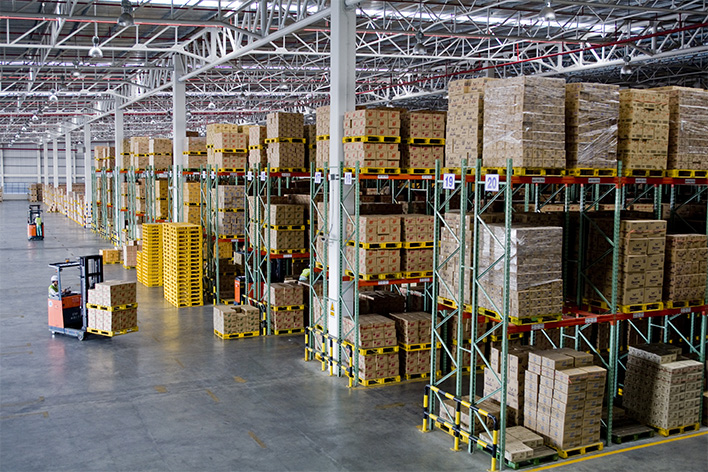 Securing good workers consistently ranks as one of the highest priorities for distribution warehouses. Of course increasing wages can achieve that goal, but that approach simply leads to increased operating costs. Irregular and long working hours in the industry also create a working environment that carries with it the burden of employee turnover and resulting depletion of the knowledge pool in the workplace.

Warehouses with frequent movements of forklifts are intrinsically dangerous environments. Regulating the temperature inside large warehouses using air conditioners is also quite difficult, with summer temperatures increasing the risk of sudden labor shortages due to heatstroke and other unexpected illness or injury. In addition, the aging workforce is a more recent issue that is adding to the complexity.

To keep operating costs down, it is important to minimize unnecessary tasks and maximize worker performance. At the same time, it is important that workplace knowledge does not reside solely with individuals, but rather within systems able to issue appropriate directions and improve overall performance. For these reasons workplaces must be designed to prevent accidents and physical stress, while providing a comfortable and safe work environment.

The starting point for companies faced with these multiple challenges is to visualize worker movements and then analyze those flows to understand and quantify any hidden waste within processes. Previously, workflow analysis was difficult to implement because it was extremely labor-intensive and costly as it relied on video-based and real-time visual inspection byeployees themselves .

This is why IoT is now in the spotlight. Using IoT, workers wear beacons, or mini radio transmitter/ receivers, which send out signals that can be picked up by locators, or receivers, making it easy to locate workers.

Fujitsu Peripherals Limited, a manufacturer of smartphones and tablet devices, is using beacon-based workflow analysis to improve the efficiency and safety of its warehouse operations. This article explores this initiative.

In May 2015, Fujitsu Peripherals consolidated its previously dispersed parts warehouses under the one roof. With a centralized warehouse covering around 7,000 square meters, or roughly the size of a soccer field, the company set about optimizing its logistics costs through integrated management of parts acceptance, inspection, storage, picking and shipping to its manufacturing locations.

Integration of these processes enabled the company to reduce its logistics costs to a certain extent, but to achieve further reductions, it needed to go to the next level and improve the efficiency of the actual warehouse operations. Kiyoshi Fukazawa, General Manager and Production Department Manager of the EMS Division at Fujitsu Pe-ripherals, comments; “Reducing labor costs inside the warehouse was a real challenge for us when trying to reduce our logistics costs.”

But the company faced other issues as well. Not only was the new warehouse huge, but the ceilings were very high as well. Seeking to take advantage of its size, the company adopted a multi-level storage system that ended up restricting visibility inside the warehouse. Kiyoshi Fukazawa confides that, “Supervisors were unable to figure out exactly where the workers where at any given time, which hindered their ability to issue appropriate instructions and support.”

To overcome this problem, Fujitsu Peripherals began using IoT to track worker movements by deploying the FUJITSU IoT Solution UBIQUITOUSWARE package, which features high-precision, real-time positioning. A series of locators mounted on the ceiling pick up the IDs and location signals emitted by the badges worn by workers. The system enables worker location data within the facility to be collected and analyzed in real time.

The company embarked on this project in January 2016, attaching location badges to forklifts and issuing them to workers as the first step toward quantifying and visualizing workflows.

Kiyoshi Fukazawa explains: “Workflow visualization enabled us to discover redundant activities such as unnecessary movement by some workers. Using data heat maps, we also found areas of the warehouse where both workers and forklifts tended to congregate.”

There were three main insights derived from this study. The first was that workers tended to congregate around the ticketing area where they received instructions for their next pick. This was due to the lengthy process of finding the right tickets. The second insight was that multi-level storage in the warehouse resulted in pickers having to wait while pallets were brought down with a forklift. And the third was that when a problem occurred, the sheer size of the warehouse meant that it took too long to go and request assistance from a supervisor.

To resolve these issues, the company moved to the second stage of the process. In October 2016, they began developing a system to overcome these problems. 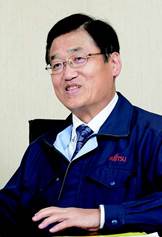 Participating in this project was Satoshi Azuma, Senior Manager of the Retail & Logistics Division, Innovative IoT Business Unit at Fujitsu Limited, who explains that, “The system built during the second stage consisted of three main functions.” As shown in the diagram, the functions are warehouse mapping, which provides a real-time understanding of the workplace through mapping of operational information; ticketing, which uses tablet devices for electronic transmission of picking requests; and a help alert, which sends help rquests without having to look for a supervisor.

Kiyoshi Fukazawa says, “Warehouse mapping enabled us to visualize the actual situation in the warehouse and understand exactly where our workers were.” He added that the ticketing function not only eliminated the need to go searching for tickets, but also reduced worker waiting times by issuing picking instructions after pallets were brought down by a forklift in the multi-level warehouse. “Help alerts also eliminated the need to go searching for a supervisor. The supervisor now receives help requests via their device, finds the worker on the warehouse map, and goes directly to that spot.” 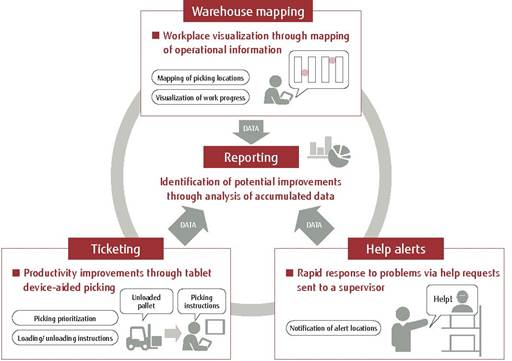 Full deployment of this system minimized redundant movements, alleviated worker bottlenecks, and reduced interference between forklifts and workers. As a result, Fujitsu Peripherals succeeded in reducing warehouse tasks by 500 man-hours per month.

To target even more improvements, the company moved to the third stage in April 2017. Using IoT data from the first stage, together with ticketing, picking time, alert and other information that the system provided in the second stage, a dashboard was developed as part of the reporting function that uses business intelligence tools for analysis.

Kiyoshi Fukazawa provides a concrete example of the insights uncovered from these three stages: “We found that while the most efficient workers’ carts kept mostly to the picking plan, there were some workers’ carts that were frequently off course.”

They looked into the actual workplace to find out why this discrepancy was occurring, and discovered that the more efficient workers were loading their picking carts with all the items and equipment they would need for the job, whereas the less efficient workers were often insufficiently prepared and had to source additional items during the job. 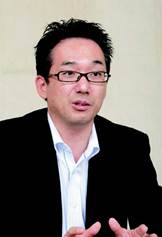 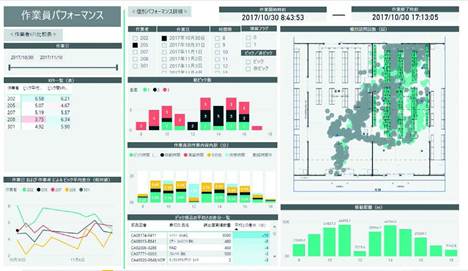 Screen example from the dashboard developed in the third stage

To resolve this problem, a standardized model was developed based on the workers’ carts that were loaded with the correct amount of items and equipment. All workers were expected to follow the standard. “Prior to that, we had tried to make efficiency improvements but there was still a lot of variation between individuals’ expertise levels in the workplace. Visualizing operations through the dashboard made it easier to discover where that knowledge was hidden,” explains Kiyoshi Fukazawa.

In September 2017, Fujitsu Peripherals began using vital-sign sensing bands to measure workers’ pulse rates and ambient temperatures. The data from the bands was used to manage the temperatures in working environments and the physical condition of workers. The distance between workers and forklifts was also measured and an alert system implemented for when workers were inside a three meter threshold. This helped to prevent accidents caused by interference between workers and the forklifts. According to Satoshi Azuma, “In addition to improving task efficiency, our efforts also enabled us to manage worker heat stress and improve other work safety aspects.”

As shown by the Fujitsu Peripherals example, the manufacturing industry is in the process of applying IoT in the workplace, and impressive results are already being seen. By combining and analyzing operational data as well as IoT-based data, previously hidden issues are being uncovered which has opened the door to ongoing im-provements.

As a result of the Fujitsu Peripherals implementation, Fujitsu will launch three new UBIQUITOUSWARE modules from February 2018: worker performance analysis, forklift accident risk analysis, and heat stress risk analysis. Fujitsu is also considering the development of logistics-related KPIs that will link location information with the warehouse management system. These workplace-proven solutions offer considerable scope for improving logistics operations within other areas of the manufacturing industry. 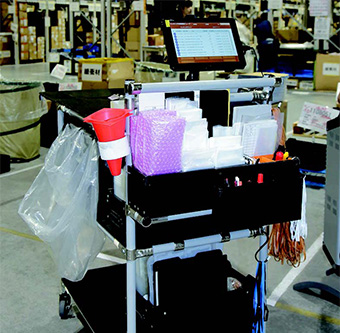 Pick cart with standardized quantities of items
and equipment 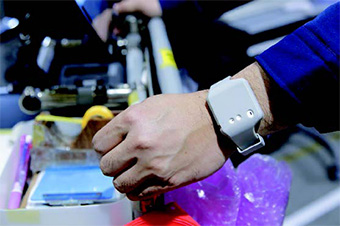