Established in 1972, Modern Terminals, a subsidiary of The Wharf (Holdings) Limited, is the longest-established container terminal operator in Hong Kong. The company owns and manages Container Terminals 1, 2, 5 and 9 (South) in Kwai Chung Port. It currently handles a throughput volume of over 5 million TEUs (twenty-foot equivalent units) a year, i.e. about one-third of the container traffic in the market.

Hong Kong, one of the busiest ports in the world, is providing world-class container transportation to the industries in South China. To operate Kwai Chung Port around the clock and throughout the year, Modern Terminals demands the highest levels of efficiency and operational excellence to meet the increasing needs of their customers. There is no room for error as any delays will lead to higher costs for traders.

Technology becomes a highly critical foundation for Modern Terminals, the backbone of everything that they do. In 2000, it established ModernPorts, Hong Kong's first one-stop e-business portal providing a wide range of port-related services for the shipping community. In 2003, it established OnePort Limited together with other terminal operators to improve the efficiency of business processes in the Hong Kong Port through an open, secure and neutral platform for exchanging electronic information.

Four main business support applications, including Internet portal - ModernPorts, financial applications, facility management/procurement systems and the Management Information System (MIS) - were running on multiple servers and on multiple operating systems. As the terminal business grows, so did the IT infrastructure.

Over the years, the infrastructure grew more complex and more efforts were needed to manage and operate it. Part of the IT spending went into maintenance, with limited improvement on performance of the overall applications.

In the long run, high system management overheads and operating costs are the concerns to Cheng Chung Keung of Modern Terminals Limited. "We are committed to achieving service excellence and exceeding our customers' expectation. Thus, we have been investing in cutting-edge technologies to enhance our efficiency and services," he said.

The decision was made to consolidate the server infrastructure. A server consolidation helped solve a number of issues they faced, such as cost savings, removing the platform constraints that hinder performance and user satisfaction, simplifying system management on unified server platform yet accommodating for future business growth.

Modern Terminals was attracted to the Fujitsu PRIMEPOWER Solaris servers for its hardware architecture and technology leadership. Fujitsu was found the best answer for the terminal services provider. Eight units of Fujitsu PRIMEPOWER 450 and two units of PRIMEPOWER 650 Solaris™ servers, and the ETERNUS3000 model 100 storage systems were installed to replace twenty units of UNIX and Alpha-based servers.

Modern Terminals is also the first customer in Hong Kong to deploy Fujitsu PRIMECLUSTER that helps Modern Terminals use the PRIMEPOWER at the highest levels of utilization as well as availability.

Modern Terminals carried out a 6-year cost analysis which compared the old platform and the new Fujitsu platform, and the study revealed that the Fujitsu PRIMEPOWER solution generated a significant 32% overall cost saving over six years.

In addition to cost saving, PRIMEPOWER 450 and 650 Solaris™ server, incorporated with the world's fastest bus technology, is widely known for its unrivaled system performance. Through actual application testing, Modern Terminals realized a threefold boost in its IT system performance with PRIMEPOWER server and PRIMECLUSTER technology. Server resource capacity has been expanded to an extent that the system is ready for any upsurge in user/application activities.

"The benefit we gained from Fujitsu's solution is a solid confirmation of our investment decision. With the increased resource capacity, we will be able to build more functions into the applications, and prepare the IT systems for more business growth," said Cheng.

Modern Terminals has been stepping up investment and planning to build a network of terminals in China. To this end, introducing a highly reliable IT system to its mainland operation is critical to Modern Terminals. "As our operation grows in China, we definitely wish to replicate the success of this server consolidation experience in our China operation to well position ourselves for future growth and further increased customers' satisfaction," concluded Cheng. 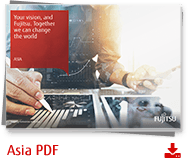