With Group companies and business sites worldwide, and materials/parts sourced from a significant number of business partners, reducing CO2 emissions accompanying logistics and transportation activities is a priority for the Fujitsu Group.

The Fujitsu Group has worked toward its targets for CO2 emission reductions from domestic transport. Since Environmental Action Plan (Stage VII), we have expanded the scope of reductions to transport within regions overseas, as well as international transport. Stage VIII also drives streamlining and greater in global logistics.

The Group is working toward lowering environmental impact throughout the supply chain, such as displaying copies of the Fujitsu Group Green Logistics Procurement Directions, to strengthen our partnerships. Lastly, as an initiative in our overall distribution process, the Group is devoting effort to the 3Rs (Reduce, Reuse, Recycle) in packaging products and materials/parts. 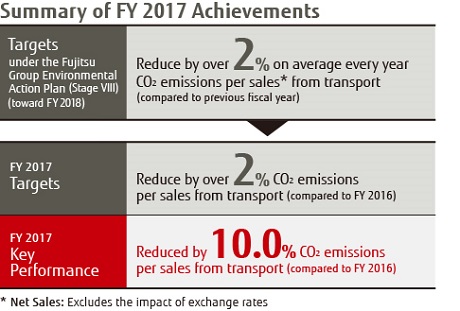 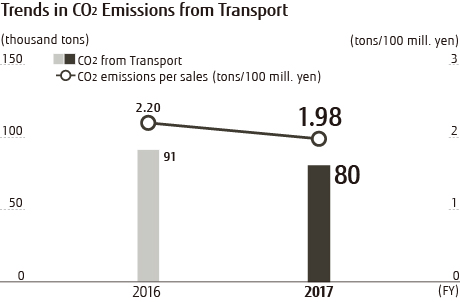 For the material shipment of computers and PC servers from overseas, Fujitsu is actively switching to ocean shipments which have lower environmental burdens and lower costs than shipments by air.

Expanding the use of joint transportation with other companies

The Fujitsu Group is promoting joint transportation by partnering with logistics providers and loading Fujitsu products together with products of other companies. In FY 2016, we mainly used joint transport on key routes between logistics terminals; Furthermore, in FY 2017, we expanded the scope of application to include shipping in major urban areas from logistics terminals to customers. This expansion allowed us to further reduce the number of trucks used.

By using the "Green Logistics Case Studies handbook of Transportation CO2 Reductions" which was created in FY 2016, Group companies in Japan and overseas actively engaged in activities such as revising their transportation plans, formulating measures for increasing loading rate, and revising packaging materials. This made it possible to reduce the amount of transportation CO2 emissions.