The new project is a venture with a perspective across the entire value chain consistent with our vision for agricultural innovation, so we were definitely keen to be involved in the co-creation of a new business model.
Masayuki Kurashina, General Manager, Agribusiness Department, ORIX Corporation

We aim to take Japanese plant and seed varieties to the world by positioning this new project as our Plant and Seedling Showroom. That is the true appeal of the co-creation project for us.
Hidemi Masuda, Senior Managing Director, Masuda Seed Co., Ltd.

Three companies have embarked on an agricultural innovation project - a company with an extensive agricultural products distribution network, a plant nursery business with expertise in developing seed varieties, and an ICT company skilled in digital technologies. Launched in early 2016, the Iwata Smart Agriculture Project aims to co-create a new business model involving a number of operators who will combine their knowledge and expertise to establish an agricultural value chain focused on creating a strong agricultural base in the Iwata area.

With exports of Japanese agricultural commodities increasing in the wake of the worldwide boom in Japanese cuisine, export figures for 2015 showed a 24.2% increase over the previous year, reaching 443.2 billion yen. On their own, these figures would seem to indicate a bright future for Japanese agriculture, but a closer inspection reveals underlying structural issues that need to be resolved if the sector is to continue growing.

For one, most agricultural enterprises are small and lack the resources to invest in innovation and growth. Furthermore, the farming population in Japan is aging rapidly. If younger people are unwilling to work in agriculture and the number of people taking up farming dwindles, this will lead to farmland being abandoned and uncultivated. As a result, yields will decline, negatively impacting regional economies.

Agricultural business has become globalized and more competitive. This all means that it is now imperative for agriculture in Japan to make drastic changes.

With our "Akisai" Food and Agriculture Cloud offering, Fujitsu has been engaging in smart agriculture projects to contribute to improving the food and agriculture industry since 2012. These have the objective of using ICT to harness different sources of knowledge and information, from a variety of operators, to deliver regional development via a strengthened agricultural sector. This is also a challenge for Fujitsu to enter the agriculture sector as a business owner rather than as purely an ICT provider.

The new Iwata Smart Agriculture Project is one of the first initiatives of the smart agriculture. It was launched with the aim of creating a strong agricultural base. ORIX Corporation, Masuda Seed Co., Ltd., and Fujitsu co-founded a joint venture company in early 2016 and started its operation. ORIX provides innovative financial services as its core focus but is also involved in other business services in a variety of sectors including real estate and energy. Masuda Seed is a plant nursery business that has developed many new seed varieties over its 90-year history. Fujitsu has a solid track record in implementing technology- based agricultural solutions.

The most striking feature of this project is that it creates an ecosystem, bringing together the strengths and diverse knowledge of multiple operators to build an agricultural value chain, thus co-creating a new business model. Having built a national customer distribution network through financial services, ORIX's forte is its ability to directly gauge the needs of the food service and retail industries. This strength is used for a 'market-in' approach which involves planned production based on customer demand. It is hoped that if this approach can inform the types of vegetables that consumers want through retail outlets, then this will encourage producers to take up the challenge of cultivating new varieties.

This will also benefit seed and plant nursery businesses that undertake agricultural R&D. Until now these businesses have been a well-kept secret. Japanese growers have had little contact with the international market and many of the new varieties that have been painstakingly developed remain undiscovered. However, the new project should address this issue by acting as the agent between the market, producers, and nursery businesses. The advantage of having a place for co-creation is that it generates support for nursery businesses, as evidenced by the fact that several companies have already approached Masuda Seed to participate as partners in the new project. 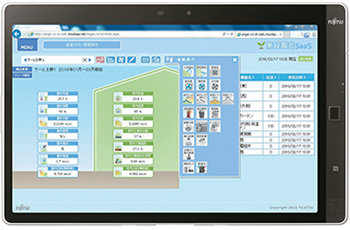 Monitoring the conditions of greenhouse

The Iwata Smart Agriculture Project will establish a new style of agriculture that takes full advantage of digital technologies including sensors, networks and cloud. It will initially address the strong market demand for tomatoes, bell peppers, and salad kale.

A plant factory consisting of several large greenhouses is to be built in the city of Iwata in Shizuoka Prefecture, which receives about 15% more sunlight per year than the national average and is therefore very suitable for greenhouse horticulture. Sensors for measuring temperature, humidity, CO2 levels, and the concentration of hydroponic solutions will be deployed in these greenhouses.

The data collected by the sensors will be sent via the network for storage in Fujitsu's "Akisai" Food and Agriculture Cloud. Remote real-time monitoring of the climate in the greenhouses - including remote opening and closing of windows, starting and stopping of exhaust fans, air temperature control, and other features - gradually builds a technical understanding of how to optimally maintain the most suitable environment for vegetable production.

In the future, the cultivation performance information stored in Akisai will include optimum sensor settings for each seed variety. In addition, greenhouse environment control methods will be packaged with a view to using them for developing a licensing business that achieves stable quality and yield. In the words of Takeshi Sudou, Deputy Head of Unit, Food & Agriculture Open Innovation Planning Office, Innovation Business Unit, Fujitsu, "Our aim is to be the driving force behind agricultural innovation in Japan through co-creation, and to contribute to regional revitalization through agriculture."

Technical data subject to modification and delivery subject to availability. Any liability that the data and illustrations are complete, actual or correct is excluded. Designations may be trademarks and/or copyrights of the respective manufacturer, the use of which by third parties for their own purposes may infringe the rights of such owner.

I-CIO: Insight for business and IT leaders 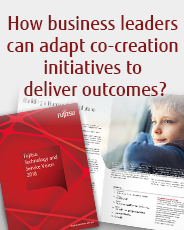