Note:
Be sure to update ScanSnap Manager for Mac to a version compatible with macOS Sierra 10.12
in order to apply all the corrections fully.
Please update your OS to macOS Sierra 10.12.1 or later before you use the update program.

For the software update history, see

How to confirm if the update is successfully completed

Confirm that the installed/updated version of ScanSnap Organizer for Mac is displayed on the version information. 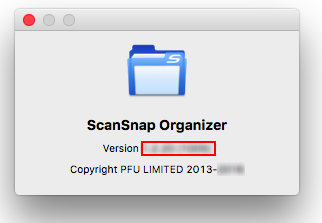 This completes the update. Refer to