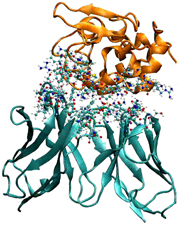 
In a world first, medical researchers at University of Tokyo's Research Center for Advanced Science and Technology (RCAST) are using molecular dynamics (simulating the physical movements of individual atoms and molecules) to design genome-based antibody drugs. The project is focused on developing effective treatments for cancer patients suffering from relapse or metastasis. To work effectively inside the body, antibody drugs have to be precisely the right molecular shape. The sophisticated simulations needed for this type of research require at least 10 times the computing power of traditional IT-based drug development techniques.

RCAST researchers chose cutting-edge supercomputing technology from Fujitsu for this project. In 2010, RCAST and Fujitsu completed development of a 300-node supercomputing cluster with a theoretical performance of 38 teraflops. The system is reducing the time it takes to design artificial antibodies from three or four years down to just a few months. And in future, by employing even greater supercomputer power (such as the K computer, the world's fastest system jointly developed by RIKEN and Fujitsu), the team hopes to be able to develop an even wider range of drugs.

Until now, R&D for antibody drugs has undergone two generational shifts. Starting in the 1990s, research involved animal testing and then "humanizing" the resulting antibodies for use in treatment on patients. The second generational shift, which began in the 2000s, led to the production of antibodies that can directly act on cancer utilizing radiation therapies. The new research project enables researchers to employ supercomputer simulations to design basic structures for antibody drugs, thereby developing revolutionary third-generation treatments with fewer side effects.