Case Study on Deployment at the Research Institute for Information Technology, Kyushu University 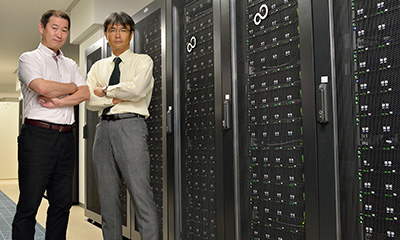 Case Study on Deployment at the Research Institute for Information Technology, Kyushu University

The Research Institute for Information Technology (RIIT) of Kyushu University provides computational resources to internal and external researchers, thereby helping produce academic and industrial research results. RIIT provides this service using ITO, a new supercomputer system that integrates the fields of data science and HPC. The system Fujitsu was commissioned to build is the first domestic supercomputer system to employ storage shared between a large-scale private cloud environment on the frontend and a backend environment, thereby achieving coordinated operation. As the number of users increases thanks to stable operation, RIIT is looking forward to Fujitsu providing operational support and coordination with the post-K computer.

"The solution enables visualization while keeping data on ITO, the new supercomputer system. Users have complimented it, saying that research throughputs have certainly improved. The system has enabled us to provide user support effectively. When a fourth-year medical student at our university started a venture that analyzes medical images, the student used ITO for research and software development during the startup phase."

Established in 1911, Kyushu University has more than 100 years of history and tradition. As a pivotal university that represents Japan, it has approximately 19,000 students (including roughly 2,200 international students), approximately 8,000 teaching staff members, 12 schools, 18 graduate schools, and 16 faculties as well as one of the largest university hospitals in Japan. Having marked its 100th anniversary in 2011, the university advocates an educational philosophy of continuing reforms autonomously, ensuring quality education internationally, and serving as one of the best research and educational institutions that repeatedly and energetically tackles issues for the future under the slogan of making the leap to become one of the top 100 universities globally in every field. RIIT supports initiatives to use ICT to realize the aims of the slogan. Regarding this role, Dr. Kenji Ono, Director of RIIT, said, "We promote education and research activities that use cutting-edge ICT and return the fruit of such activities throughout the university. In addition, RIIT's supercomputer system contributes to strengthening the foundation of academic research in Japan and to developing new academic research projects by providing its computational resources to internal and external researchers through various programs implemented by RIIT as well as JHPCN (Note 1) and HPCI (Note 2)."

In October 2017, the new supercomputer system ITO was launched on the Ito Campus, one of the university's education and research bases. The system, which Fujitsu was commissioned to build, is an ambitious project that aims to realize a new, internationally distinguished leading-edge concept of integrating the traditional high-performance computing (HPC) field with the data science field, which uses machine learning and big data.

Note 2: HPCI
High Performance Computing Infrastructure. This is an innovative computing environment that meets various user needs by connecting the K computer with other major supercomputers deployed at universities and research institutes across Japan via a network.

Coordinated operation with storage shared between the front and back ends

ITO is the first domestic supercomputer system that realizes integrated operation of the frontend subsystem with a large-scale private cloud and compute servers on the backend subsystem through the fast file system. Dr. Ono explained the intention: "ITO tried to make usage flexible not only in the HPC field but also in the data science field. Data science involves repeatedly issuing data queries and checking results to issue different queries in a drill-down manner to derive meaningful regularity and connections. The interactive-ness enabled by the frontend of ITO meets such needs of data scientists."

Interactive use is enabled by the storage shared between the front and back ends. Dr. Takeshi Nanri of RIIT explained the reason for shared storage: "Machine learning process contains such steps as data preparation, learning and reasoning. The problem is the data transfer that occurs in each phase. For example, transferring tens of terabytes of data requires several days. The same problem can be seen in HPC use. Some users previously noted that transferring many simulation results to their laboratories took more time than the computation did. To solve that problem, this implementation enables the user to go on to the next step after just checking the results on the frontend while the data remains in the same storage."

Regarding the key points when preparing the RFP for ITO, Dr. Nanri said, "We selected GPUs suited for the data science field and formulated the specifications as well as CPUs used in the HPC field could also deliver sufficient performance with the limited available power. We also focused on power monitoring to collect information to improve power efficiency and lower power consumption. In addition, we included a provision on coordination with public clouds so that we could temporarily scale out when too many computational resources are consumed due to busy workloads.

In April 2017, Fujitsu responded to the university's RFP and was selected in open bidding. ITO's backend system is comprised of more than 2,000 Fujitsu PRIMERGY x86 servers in a hybrid configuration of CPUs and GPUs, which achieves approximately 10 Pflops of overall theoretical peak performance, a top-class record for Japan. In addition, the know-how cultivated during the K computer project, including the adoption of FUJITSU Software Technical Computing Suite (HPC middleware that helps operation of large-scale systems efficiently with system and job management features) and FEFS (a high-capacity, high-performance, and highly reliable distributed file system used by many domestic and overseas users) is utilized.

Fujitsu UNCAI (integrated cloud management software for HPC) is used so that the frontend (164 servers) can share storage with the backend, thus enabling a hosting service. UNCAI's resource reservation feature automatically sets up the resources, OSs, and applications that users want to use at the specified times.

To meet the needs of the university as it works on the new concept of integrating the data science field with the HPC field, Fujitsu adopted the optimal system configuration made up of not only Fujitsu's but also other vendors' products. The university appreciated Fujitsu's technological and comprehensive strengths that enabled rapid construction that took only six months in spite of a multi-vendor project.

Benefits of Deployment and Future Outlook

In October 2017, the frontend system and backend system B (equipped with GPUs) went live, and which was followed by backend system A in January 2018. ITO operates stably and has approximately 2,000 users at the moment. The solution enables visualization while data is kept on ITO. Users have complimented it, saying that research throughputs have certainly improved. The system makes it possible to provide effective user support. When a fourth-year medical student at the university started a venture that analyzes medical images, the student used ITO for research and software development during the startup phase.

Dr. Nanri mentioned that the university is working with Fujitsu to solve issues that have emerged during operation: "We started a joint study with Fujitsu to, among other things, build an application runtime environment to increase convenience for users and to develop operations technologies to improve power efficiency and peak shifts based on electricity monitoring data."

Dr. Ono commented on the future prospects: "Enlightenment and educational activities, such as holding symposiums and workshops to promote use of ITO, are an important future theme. In addition, we are working on in-situ (on-the-spot) visualization to expedite research and development. This will make it possible for users to see the backend computing process from the frontend, change parameters when changes are necessary, and go on to the next computation. We want Fujitsu to support ITO's stable operation and education activities as well as coordinate with the post-K computer."

ITO is accelerating the realization of the aims of the university's slogan, namely making the leap to become one of the top 100 universities globally. Going forward, Fujitsu will continue to leverage advanced technologies and our comprehensive strengths while supporting the activities of RIIT, ITO's operator.

Messages from the sales representative and SE in charge

In taking on the innovative and pioneering requirements to achieve Japan's leading performance, we were able to establish a system that will contribute to offering the new direction of supercomputers that provides advanced problem-solving abilities.

Fujitsu will continue to strive to pursue secure and stable operation of "ITO", and work with Kyushu University to open up new possibilities in HPC, AI, and data science, with pride as a vendor that is helping to strengthen the foundation of academic research in Japan. 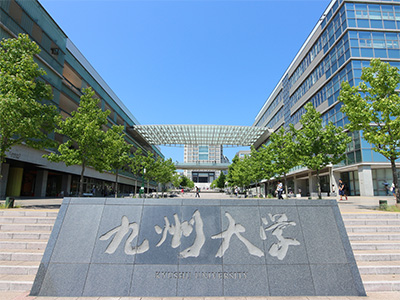