Fujitsu Semiconductor Limited announced the release of the 8Mbit ReRAM(*1) MB85AS8MT, which has the world's largest density as a mass-produced ReRAM product, available from September 2019. This ReRAM product was jointly developed with Panasonic Semiconductor Solutions Co., Ltd.(*2). 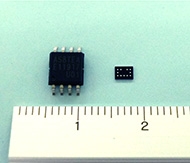 Its major feature is an extremely small average read current, despite its large density. At an operating frequency of 5MHz, the average read current is 0.15mA, which is only 5% of large density EEPROM devices.
Therefore, mounted in battery-operated applications with frequent data-read operations, such as specific program reading or setting data reading, it enables minimal battery consumption due to its very small read current. (Fig.2)

Fujitsu Semiconductor will continue to devote its efforts to devising the best memory for specific applications by specific customers. 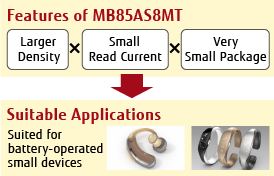 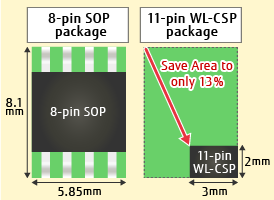 (*1) ReRAM:
Resistive random access memory. A form of non-volatile memory in which pulse voltage is applied to a thin metal oxide film, creating massive changes in resistance to record ones and zeros. With a simple structure of metal oxide placed between electrodes, its manufacturing process is very simple, while still offering excellent features such as low power consumption and fast write speeds.

(*3) FRAM:
Ferroelectric random-access memory. A type of memory that uses a ferroelectric file as capacitors to store data. Retains contents even when power is cut. Combines benefits of both ROM and RAM, with fast write speed, low power consumption, and high read/write cycle endurance. Also known as FeRAM. Produced by Fujitsu Semiconductor since 1999.

For requests of evaluation samples, and/or
documents such as datasheets

For general questions, such as technical
inquiry, sample availability, pricing